On Wednesday we covered Amazon as a possibility on the upside and it did make valiant effort on the attempt to break through the downtrend line off January high today. Still looking positive as it consolidates near the current high off the October low. For more on the outlook simply refer to Wednesday Notes.

Today I wanted to look at the Russell 2000 Small Cap index. A quick look at the chart below shows the struggles the index has experienced throughout the year. We are essentially even on the year, but we have seen plenty of attempts to sell lower. The index has managed to bounce back from each of the these moves in February, May, August and September. We once again are at a critical point of decision for the index and how it will respond going forward. The index sold off 11.3% from The September high to the October low and then managed to rally back from that deficit and make a one day break above the September high. Since that day we have moved lower, tested support at the 1153 mark and bounced back to 1170. I know what you are thinking… why should we be interested in the index based on this new or the chart? For the simple reason the index led the downside in September and led the upside off the October 15th low. And when we need it to take some renewed leadership, it falters temporarily… 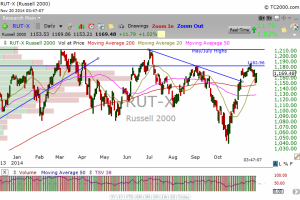 This puts us in the position of watching to see how it unfolds, but also in the position of needing the growth sector to step in an take on some leadership if the broad market indexes are going to renew the upside for another leg higher. The bounce on Thursday was a good start to the equation, but there is the question of if this is only window dressing to keep us from anticipating a move lower. There are plenty of questions to be answered if the index is to renew the upside leadership and what would be the reason/catalyst for the move higher? Is it sustainable? News could push the index higher and then fade, an event could take it higher for a slightly longer period of time and then falter. Fundamentally the underlying stocks could become an argument too good to ignore despite what is taking place in the news. Thus, we have to give it room to make the move and validate what is driving the move. If it turns lower we have to address the same analysis for the driver and time frame to put the move in context.

Biotechnology (IBB) stocks have been the leadership for the index on the move higher off the October lows, but if we look at a chart of the index it has stalled and is in a consolidation phase looking for a similar catalyst. The same is true in the small cap financial stocks and the small cap energy stocks. Bottom line the three major drivers have all stalled and led the broader index to speculation and irrational movement of late. Volume has dropped 40% over the last month of trading showing the lack of conviction or presence of buyers or, really for that matter, sellers. That brings us to the simple task of being patient and letting the driver define itself up or down. With that defined driver we will also know how to address the timeline for the move relative to the driver/catalyst. The hardest thing for investors and traders is to be is patient while the catalyst is defined. For now let it unfold and then decide how you want to trade the small cap index.

If you missed last nights webinar, below we have provided tonight’s Research video update that includes a short recap of the need for Creating a Discipline Strategy.   If you would like to see last nights webinar in its entirety you can order it here.