1876 to 1850 to 1869, and I am not talking about what happened in those years, I am talking about the intraday swing of the S&P 500 index. All I can say is, hello volatility, but then again, the VIX index did not show much relative to price swing. Maybe that should have been a clue the selling wasn’t going to stick today. The rally to start the day was on the back of good data point relative to the pending home sales showing a significant jump over last months numbers. Housing has been a lagging component of the economy of late. Thus, some positive news was met with a positive response in stock prices.

The selling was on the heels of Banks of America announcing they made an accounting mistake on their regulatory capital numbers, and the Fed forced the bank to suspend it’s dividend and stocks repurchase plans. Bank of America fell 6% in response to the news and took the markets on a ride lower. Of course the fear of another potential issue facing the banking sector sent the speculators to the media to produce fear driving headlines. KBE closed lower by 0.9% on the day as a result, but more importantly this likely to hang over the sector going forward. Thus, once everyone had a change to deal with this event the buyers stepped back into the market and we move higher into the close and back into positive territory. The chart below shows the wonderful ride the index embarked on today. 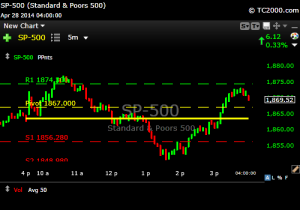 The market is emotional enough without giving it a reason to become neurotic. This goes back to our concerns over the current market sentiment and jumpy things are resulting from the lack of clarity in the markets looking forward. Today’s events like those with Bank of America feed the clarity issue and in turn creates uncertainty leading to emotional reactions. The good news is the market managed to maintain some damage control with the index moving back towards the high of the day. As I stated in my morning trading notes, clarity is the key, and until we gain some putting capital at risk isn’t high on my list of activities.

There is plenty of homework to conduct tonight as we review the sector moves and what is taking place following today’s market move. The NASDAQ moved nearly 100 point intraday, peak to trough. The sectors were mixed as well with the high beta growth stocks suffering the worst of the downside. The defensive sectors continue to attract money with consumer staples up 1.1% on the day. The dividend stocks are remain in favor as a defensive play short term to the growth stocks. I think is important to state the obvious here, and note that if the markets sell off, there is not such thing as a defense sector. It will only mean they may fall less than growth stocks. Thus, protect against the downside risk at the level you are comfortable.

My advise remains the same, take this one day at a time and be patient with the movement near term. There are times where cash is the best sector to own until the markets regain their clarity and confidence.