Jobs are the key data point for the day. Expectations are for 150,000 new jobs to be added in May. The real kicker on Friday may be the ISM Manufacturing report. If there is a decline of note, it could impact stocks more than the jobs report. Even if the data is in line or better than expected it doesn’t abate the risk currently in play for the broad market. The volatility index has pushed above the 21 level showing short term fear. Bond yields dropped to record lows on Thursday. Q1 GDP was revised down to 1.9% growth, and that was the good quarter? Chicago PMI plummets with talks of a recessionary decline. ADP shows second quarter slowing in new jobs by 30%. Add this all up and the data is not pointing in the right direction. This has money on the move and the obvious benefactor is Treasury bonds and the US dollar. Not the picture many analyst were painting in the first quarter as stocks advance at a record pace. May took back more than 6% of the gains on the year leaving the S&P up 4.2% for the year. Respectable, but May has taken its toll on the psyche of most investors.

The perception of risk based assets remains negative and the rush to safety is being reflected in the ten year Treasury bond. The yield fell to a new low at 1.57% on Thursday as investor globally shield money from risk. The ten year German Bund was at 1.26% as money leaves Italy, Spain and Greece for safer ground. Many continue to believe this is a temporary issue for the debt markets, however there are those who believe we are headed the direction of Japan. The economic picture in the US and globally will have to improve for the yields to begin to rise again. The impact to the retired individual is substantial. They cannot find safe yields above 2% currently, and that is prompting many to put their money at greater risk to get a higher return on investment. Those actions bring a different set of concerns moving forward. If you are looking for yield on investment today you have to take a much different approach than just three years ago. My warning is to investigate and understand before you put your money at risk. What sounds to good to be true generally is.

The flight to safety is hitting the junk/high yield bond market. The sector has seen outflows of $2.84 billion dollars. As stated above money is searching out safety as the perception of risk continues to rise. This is a trend shift for the high yield market which has seen solid inflows of money until the last three weeks. Why the shift? Simply put risk avoidance. Is there opportunity in the shift? Absolutely, just be patient enough to let it develop.

The chart below of the S&P 500 index shows the drop in stocks from May through October of 2011 in the shaded box. The second shaded box is the beginning of the drop this May. The drop from May through the low in June was 7.6%. The drop in May 2012 was 7.8% at the low of 1295. Similar? Absolutely. The interesting part is the reason for the decline… Europe sovereign debt issues. Last year was limited primarily to Greece and this year Spain has joined in on the worries for investors. The risk are rising as we head into the summer dull drums. The bigger concerns for investors looking forward isn’t just the similarities and the potential selling in the index, but the threat of a global recession that will cause further damage to stocks. Risk management has to be the number one priority for investors moving forward. As stated above, chasing higher yields or growth is a dangerous game and the chart reflects the potential downside risk for investors. 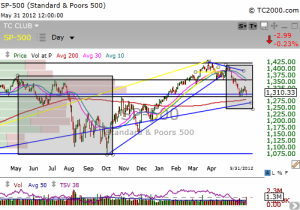 The one bright spot I did see on Thursday was retail. Same store sales were slightly better than expected overall. This is one of the old leaders and it is attempting to hold the move off the lows and fight it’s way back to the previous highs. As they say, you have to start somewhere, and maybe this is the place. XRT, SPDR Retail Index ETF remains in a downtrend off the May high, but watch for a move above $58.80 as a positive short term.

The bias remains on the downside. That doesn’t mean the markets will move lower, it is just a reflection of the data and the activity in play. Thus, risk is elevated as we discussed. The best course of action is one of caution or working on your golf swing. We continue to scan and we find opportunities both short and long. We will post what makes sense relative to risk/reward, but we also have to listen and watch what the market says and does.