Investors step up their buying to start the trading day.  The S&P 500 index cleared the 1430 level intraday, but closed at 1428. The resistance range remains in play for the index, but the gains on the day were positive. The late day give back came on the heels of Senator Reid stating there is not likely to be any deal before Christmas. Most indexes lost about 0.5% on the announcement.

The NASDAQ wakes up to post a gain of 1.2% and close back above the 3000 level on the day. Technology stocks were the clear winner as investors grabbed shares of semiconductors, networking and software companies with the sectors gaining nicely on the day.

The FOMC meeting ends tomorrow with rumors of more quantitative easing. Now the number is $4 trillion expansion of the balance sheet for the Fed. The  Treasury bond purchases are to keep interest rates low. How that helps with the economy is a mystery to me since the last efforts were not helpful. It will be something to watch as it unfolds and the details of any future actions are made public.

TripAdvisor (TRIP) now has Liberty Media as the majority shareholder in a deal announced this morning. That helped our position jump 7% on the day.

Still taking it one day at a time for now.

The index moved to the top side of the resistance range at 1428. The key is to break through the 1430 resistance. The 10 day moving average has crossed up through the 30 day and the confidence is building from investors. The Scatter Graph below has a starting point of 11/15 which was the pivot point for the recent uptrend. As you can see at the end of the chart the sectors are coming together due to the rotation and acceleration overall to the upside. Materials bounced back from the selling and pushing higher. Technology has struggled with the Apple saga, but posted solid gains the last two days. Still struggling overall to define direction and leadership.

The chart is showing rotation to financials, industrials and utilities as the leaders. Energy has made a turn off the low despite oil dropping back to $86. We continue to watching the jockeying for position short term, but we are still in need of a catalyst to the upside to break through resistance on the index. The market wants to move higher, and made a solid push towards that goal today.

VIX index rose last week before the big drop on Friday. The downside is back on play with the consistent drop of late on positive trading. 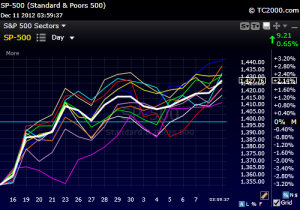 NASDAQ Index – Apple bounced on Tuesday gaining 2.1% and that helped the broad index post a positive gain on the day as well. The index cleared both the 200 day moving average and the 3000 mark on the day. As goes Apple, so goes the index for now. Not willing to buy into the index until the Apple flu is cured. This could get interesting short term.

Dow Jones 30 Index – The bounce back above the 200 day moving average is a positive, and we made the move above the 13,080 resistance. 13,300 is the next level to clear on the move higher (hit it today). The close was positive, but some resistance is now in play.

S&P 400 Midcap Index – The bounce off the low has now returned to the top end of the previous trading range. A break above the 1000 mark on the index was a positive and a opportunity to trade the sector. Took the entryMonday on the move from the trading range. Watch and manage the risk.

S&P 600 Small Cap Index – Stalled near resistance at the $76.80 level on IJR. Still looking for a break from the consolidation to the upside short term. That took place today on the move through resistance and a positive close.

Dollar – The dollar sold lower and broke support at the $21.95 level on UUP again. The greenback has been up and down of late and for now I am more interested in watch than owning the dollar. The dollar index (DXY) pulled back to support at 79.6 and bounced on Monday back to 80.26.

Euro – The euro dropped back to support and bounced on the dollar losing ground on the day.

Treasury Bonds – The yield on the 10 year rose to 1.64% and the 30 year to 2.83% on Tuesday. For TLT that pushed it lower from the consolidation wedge and sets up a trade opportunity on the short side. Watch for the outcome to give some clarity to the trade.

Natural Gas fell 1.2% on the day. The break of support near $20.15 on UNG opens the downside even further. Watch for the gap to fill and any opportunity that results on the downside.

Base Metals – DBB are testing resistance at $19.40 on the upside and if we find the catalyst to move through that level would be short term trade opportunity. Gapped higher today and is ready to climb further short term.

WATCH: EFA – Back at the highs of $55.20 and in position to break from the trading range for a trade set up. Cleared resistance at $55.20 and holding. The jump back to this level has been quick and may test before continuing higher. Be patient and see how it play to start the week. ONLY ETF Model.