Without having to repeat this weeks headlines lets just call this a reversal of news and comments. The FOMC provided  the comments and Russia provided the news… end result a bounce off the lows from last week. The uncertainty remains along with a lack of clarity, but the buyers want to make another run at new highs. Time will tell and we will remain patient as it unfolds.

As we discussed last week the markets longer term view is still elevated well above the current trendline. This poses a short term challenge for the sellers as they will need a catalyst to push the indexes back towards the support levels of the current trend.

How do we adjust and use the current data to help us next week? Hopefully better than last week when everything set up for negative week of trading and the buyers step back into the picture on the news in Ukraine. The Fed turned a negative into a positive catalyst as well. Thus, we approach this week with cautious optimism that the buyers want to take the broad markets higher and the rotation to new leaders will leave an investable trail.  If you have longer term positions you made it through the test and bounce back near the previous highs.

Below we cover in more detail our strategy for the week.

Have a good week of trading!

The data this week is given an assist on the upside as New York PMI, industrial production, jobless claims, Philly Fed and leading economic indicators were ahead of expectations. That put investors in a positive mood to start the week and add some confidence to the FOMC announcement.

The drag this week came from the housing sector. Housing starts, existing home sales and building permits were on the disappointing side. The analyst reports attributing some of the slow down to higher home prices. That is a factor relative to income and jobs. Homebuilders were downgraded by several analyst as a result of the news. This is a sector to watch going forward for opportunity as it unfolds.

The Fed stole the show on Wednesday as Yellen made comments that rattled markets until everyone rethought the time frame and decided it was in line with expectations. I am sure we have not heard the last from the Fed and we will continue to watch how this story unfolds.

The models can be linked to below and each has been updated for the current outlook:

On February 3rd we started another pivot point to continue the upside move. On March 6th we are watching to see if the next pivot point is in play? The bounce March 7th negated the move lower and the trend has turned sideways and we would need to break above the March 6th high to resume the uptrend.The pressure remains on the US markets to continue the leadership. The EAFE (EFA) index turned lower on March 6th ans has continued and the downside is in position to create a short trade (see below). Europe (IEV) equally has been trading lower and has formed a triangle pattern and a break lower would offer a short trade as well (see below).

The asset classes are weaker despite the positive week in the US markets. Watch the setups below and let this play out short term. Markets still lacks conviction short term in either direction.

For the week of March 24th: 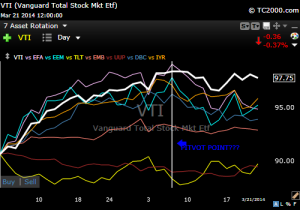 The US equity indexes established a pivot point on February 3rd off the lows, but on March 7th started to turn lower, but that reversed this week and pushed back to the previous high. The week ended on a negative note Friday following the Fed stress test for banks. The selling late day left US stocks in limbo heading into this weeks trading. On Thursday financials established some leadership for the broad index, but that failed on Friday. Therefore we head into the week with plenty of question marks.

For the week of March 24th:

See S&P 500 Model for current watch list and stops on existing positions. Other models like ONLY ETF will capture the short trades as the S&P 500 only short position is SH for the index. 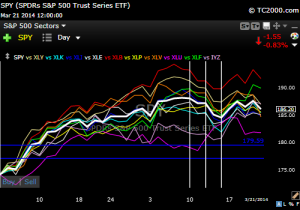 We are still working off the January 30th pivot point which has amounted to modest move lower to test support on the dollar. That support broke last week offering the downside trades in the buck. Following the FOMC meeting the buck bounced and is testing resistance (Previous low) and we will watch to see how it plays out short term. No interest in trades at this point in the asset class. 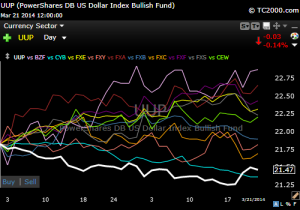 We are still using the December pivot point and the trend is still slightly higher to sideways. Yield volatility has picked up relative to the economic data and the Fed. Throw in some geopolitical data and the sector remains volatile. The chart below shows the lack of clarity relative to leadership from the sector. They are all addressed below. 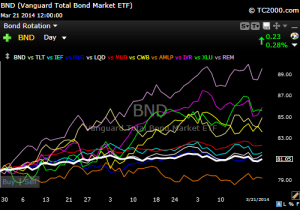 4) Commodities – The commodity index (DBC) made a pivot lower on December 29th, but the move off the February 3rd low was a pivot back to the upside or what really amounts to a sideways trade. March 3rd shows a modest pivot lower and from there we get a better picture of what is moving the sector overall. Natural gas had been the clear winner in the sector, but that has shifted lower and is trailing the sector overall. Leadership moved to PALL this week with oil, gasoline and copper attempting to move higher.

DBP shifted lower as well with the selling in gold. PALL is the leader in the precious metals. Base metals DBB sold lower again with weakness across the board.

Not a sector to like currently as the bounce fades and the sellers take advantage.

For the Week of March 24th: 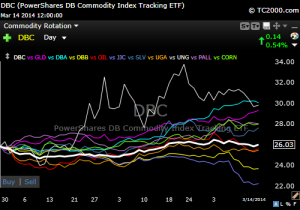 The global markets established a pivot point on February 3rd as it is tracking with the US market. This week the two parted company temporarily on the bounce back from the Fed announcements following the FOMC meeting. The difference is the issues of geopolitical debates with Russia. Europe stands to be hurt more by sanctions than the US. Watching to see how this unfolds going forward.

For the Week of March 24th: 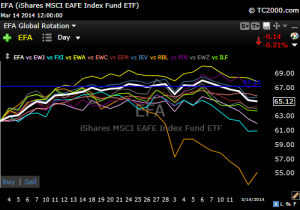 Real Estate Index (REITS) – Potential pivot point on March 4th in in the REIT. I still like the outlook for the longer term play along with the dividend and growth opportunity. Watching to see if the lower holds. The reversal off the low on Thursday is good start, but interest rates will be the determining factor. If the Fed can keep lower rates in play and believable the rally returns. Watch and manage the risk of the position as well as the parts. 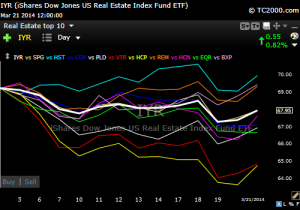 Sector Summary: Bounced off the lows and trending sideways. Any positions are for the dividend play only.