Does a day of downside equal the extent of the correction/selling? It felt almost like an extended flash crash in the markets over the last 24 hours, but after testing lower on the anxiety created by the Bernanke testimony, the markets moved back to some normality the last half of the trading day. Thus, again the buyers step into the selling and pull the markets up.

The volatility index spiked higher to begin the trading day hitting 15, but managed to calm and close close to 14. This is like most attempts over the last three months on the sell side, noise quickly takes the market lower and then the buyers step in to rally back to even or profitable on the day. The end result is we hit stops, and now look for the resulting opportunities as this all unfolds.

The mew home sales were better than expected and prices were higher. That is good news for the Home Construction (ITB) which rallied back from the selling to support. The selling turned to buying today on the data and pushed up 0.9%.  Still a sector to watch moving forward.

The move today validated the buyers are still in play as the major indexes tested lower and managed to move back near the even mark on the day. This validates the power of the Fed near term in reference to the stimulus dump of $85 billion per month. Remain focused and don’t assume anything, let this play out accordingly and we will find the opportunities as they develop.

Major market indexes drop at the open, but find a way to rally back. We still have to watch to see how this will work tomorrow. No need to speculate, just let it play out one day at a time.

The April 18th chart below is the last low in the test off the April 11th high. You can see the selling impact at the end of the chart and who the biggest losers were. We have to be patient and let this play out going forward. Added line on the high for April 21st to track as the current high or pivot point if the downside continues. 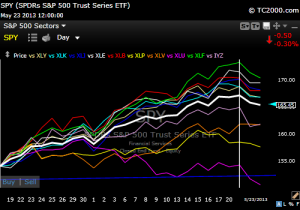 The current trend started on November 15th and has been tested by the the ‘fiscal cliff” issue bottoming on December 28th, The February 25th low pivot point was prompted by FOMC rumor of withdrawing stimulus, Cyprus on March 14th and the April test on economic worries.  The original target for the move was 1550-1575 which has been obtained.The uptrend remain in play, but the extended move has brought equal concern to the current highs as seen in Trading on Wednesday. 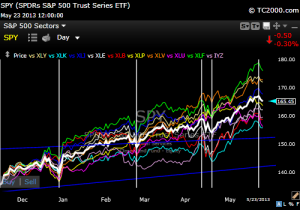 Technology (XLK) – The pullback from the move higher tested $31.40 as support and held for now. HPQ was up 17% today to lead the sector. If support holds looking for a trade on the upside.

Consumer Staples (XLP) – Moved to new high and tested support or breakout point for the trading range. The move holding on the close the breakout level of $41.35 gives hope to the upside continuing.  Watch to see if holds or prompts more selling. $40.75 is the short term (trading) stop. Patience.

Healthcare (XLV) – The sector broke from the consolidation or trading range to the upside. The test is just that for now. After hitting new highs Wednesday in early trading the sector reversed and gave up all the gains closing flat. Today the open was lower, but reversed to close again flat on the day. Holding the move higher and looking for a continuation on the upside as this fear issue subsides. Track to see how this plays out short term and mange your stops.

Energy (XLE) – Moved above the $80 level and has now tested the breakout level. All positive for now, but watching the downside risk. Still in uptrend and still in play. XOP and IEZ  both tested lower, but seem to hold the near term moves higher. Manage your risk and let this play out.

Telecom (IYZ) – Big test lower losing 2.4% on Wednesday. Thursday started lower, but closed higher. The upside is attempting to hold on to trend, but the sellers are attempting to push the sector lower. Remain patient and let it play out.

Utilities (XLU) – breaking down short term on a failed bounce. Hit the stops and took the exit for now. The follow through on the downside today was a negative, but we can only watch and decide how to play it going forward.

Since the high on March 27th the dollar has essentially moved sideways to down. Starting April 23rd the dollar steadily declined until bouncing on May 1st. It has accelerated back to the previous high and higher. Small test today following the  new high hit last Friday. The chart below shows the path of the dollar against the other currencies. 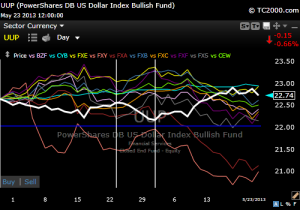 Treasury Bonds – Complete reversal on the yield has pushed the bond lower and is in position to test the previous low. Not a place to be other than short the bond. TBT. Hitting against some resistance relative to the yield. Watch and be patient as this plays out. Raise your stops on the TBT or TBF position.

High Yield Bonds – HYG = 6.5% yield. Support at $94.75 and tested it today on the downside. Watch your stops and take the exit if the downside continues short term. Sitting on the 200 day moving average.

Corporate Bonds – LQD = 3.6% yield.  Bonds have dumped with the rise in rates short term. Still moving lower and no interest for now. Is $119.30 support? Watch to see how it plays out. (no current positions in the bonds)

Municipal Bonds – MUB = 2.8% tax-free yield. Shifting gradually lower as the risk relative rates is in play. Collect your dividends and let it ride for now. Stop at $110.50 short term. testing the downside currently.

Convertible Bonds – CWB = 3.6% yield. Price had been moving higher on the rally in stocks. Broke to a new high and steady as she goes. Keep and practice dividend collection. Watch for stop placement to protect the gains near the $44 mark. (HIT on Thursday and willing to bank the profit for now.)

I have moved the starting point forward on the chart. DBC has moved sideways since April 15th start point. PALL is moving higher and leading the metals. The balance of the sector is vertically challenged. Be patient and let the winners define themselves before going into sector. 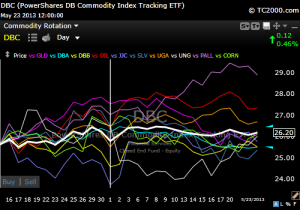 Global markets have shifted to the downside on selling in Japan and China. The Asian connection is hurting the overall index. The chart below shows the shift over the last two days on the downside. We don’t own any positions in the global markets and for now I am still willing to sit on the sidelines. 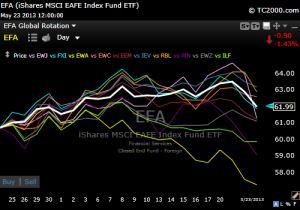 Real Estate Index (REITS) – The sector broke the uptrend and signaled exits today. We will have to step back evaluate and determine how to deal with the sector from here. Moved to Cash on balance on positions.