I will go on record as stating this was one of the more interesting trading days we have experienced in some time. Looking at the sectors versus the broad market indexes you would perceive we had a volatile day in the markets. You would be wrong, at least based on the volatility index which actually fell to 11.9 before closing at even at 12.3. The other side of the story is the ETFs that trade the VIX were down 1.1%? Let’s just say that the implied volatility had something to do with the discrepancy between the two. That aside it was a story of what was working versus what was not.

Tuesday the story revolved around oil (USO) on the downside as worries about the global economic data showing weakness in Europe and China in the manufacturing sector. Wednesday the story was again in oil (USO) except it was on the upside as the news from Russia and Ukraine stated they had negotiated a peace agreement or treaty. That sent crude back near the $96 level closed at $95.30 up 2.3% on the day. USO is now down nineteen cents from the close on Friday. This begs the question, which story/news event is right? In reality neither… they are both news and speculation with no data to confirm the impact of either event. Thus, it is back to the drawing board of looking for validation for the price of crude.

First, consider the technical data that shows a downtrend since the high in June, and while that is a microtrend, it is worth our attention short term. A move back above the $35.83 level would complete a bottom reversal for the downtrend and create a potential investment on the upside. However, we would need to refer to the second and third issues below before making that commitment. A peak at the weekly chart shows more of a sideways trading range for the commodity and is the more likely outcome moving forward. 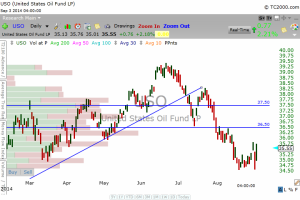 Second, consider the fundamental data that shows a decline in demand. This conclusion is derived from the rising supply reports in the US, Europe and China. Is it a sustainable trend? The manufacturing data would say yes in Europe and China, but we would still like to see more evidence of this going forward. Thus, the validation of the fundamental data will take a little more time to sustain any downside risk to the price of crude.

The conclusion… oil is trading in a broad range as seen on the weekly chart. A simple conclusion would be to trade the range and use smart entry and exit points based on technical support and resistance points as well as pattern and trend setups for the trades. This remains a trading sector from my view and nothing more short term.

The impact on the energy sector has been short term weakness and more sideways trading than anything. XLE is still dealing with the resistance at the $98 level. IEO and XOP have been more volatile in the response to the downside in crude. Both were in position on Friday to break higher. That is not a defunct possibility, but it will have to pick up some momentum to break higher. Patience is the best course of action as this unfolds an the rest of the story is told.