So much for the selling as the markets established a low on October 15th and rebounded back to the previous levels. That much volatility in a four week period is more than most investors can stomach. As we did not close the month below our exit signal we are still holding our allocation and moving forward. Hopefully November and December will end the year with less excitement. The bounce off the lows leads us to believe the Fed intervention relative to eliminating Quantitative easing and pontificating on positive growth looking forward will suffice for the balance of the year. Below we address some of what has happened and what is on the horizon for the balance of the year.

The S&P 500 index gained 2.3% for the month of October, but declined another 5.6% before rebounding off the October 15th low. The worries that pushed the index lower were reversed on the belief the Fed would not act as quickly to hike interest rates. The push lower came as the Fed was set to cut the quantitative easing stimulus and with the GDP data stronger in the third quarter… speculation about interest rates moving higher started. That sent some to the exits to escape the impact of higher rates on the growth of stocks. Remember that debt services (payments) rise and interest rates rise and that would impact earnings on corporations. Thus, leave stocks in anticipation of what might happen, not what is happening. With a longer term perspective the short term speculation doesn’t matter… or it shouldn’t. You know as well as I that when markets decline 10% in four weeks even the bravest of investors get worried… especially after 2002 and 2008 declines. Hindsight shows the worries were speculative and temporary. If we had closed the month below our exit points we would have simply moved to cash and waited for the next opportunity to put our money back to work.

The chart below is the S&P 500 index since January of this year. Despite the ups and downs the index has advanced 9.1% for the year. You can equally see we broke the long term trendlines of the index near the 1900. It also broke below the 200 day moving average (blue line) and showed some climax selling before the intraday reversal on October 15th… just not a pretty picture. However, you see the right side of the bottom which completed a ‘V’ bottom reversal that is now at the previous highs. Looks like nothing happened or whatever was worrying the markets left. For now all is well and investors nerves have calmed. 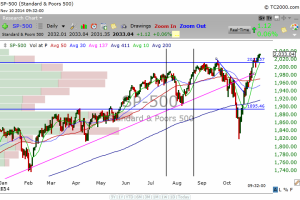 What changed? Simply put the economic data has remained steady, the Fed has slowed comments on hiking interest rates, the Fed has cut the quantitative easing of free money, global economies have picked up offering stimulus, the dollar has gained strength, oil prices have declined, and the consumer is still engaged in spending as the spread the wealth. As simple as we can make it, all is well and the fear of the world crumbling around us have been put to the side for now. There is peace on earth or at least in the market.

A quick look at the returns for the major market indexes in September:

The major market indexes rebounded nicely off the lows as we discussed above, but the challenge remains the same… economic growth. Despite the positive GDP posted for the third quarter the fourth quarter has seen plenty of revisions as companies lower expectations for earnings. The greatest of the concerns come in the consumer sector as the holiday shopping period is expected to decline year-over-year. Thus, we continue to watch the consumer reports and look at the retail sector overall. In mid-November we will get third quarter earnings for sector and they will give some renewed insight of what is taking place currently and looking forward.

The global picture has seen the greatest impact on the downside as Europe struggles. The credit continues to be given to the Russian sanctions over the Ukraine invasion. If and when those sanctions are removed the hope if for the picture to improve in Eurozone. The emerging markets are equally challenged as the dollar strength continues to impact these countries. A stronger dollar weakens oil prices which are now below $80 per barrel, and commodities overall such as gold and other metals… which is the greatest portion of GDP in the emerging markets. They are worth watching for future opportunities, but not worth the risk of holding currently.

Economic data remains the one key ingredient we are watching going forward. The improvements in third quarter relative to GDP may not be sustained as we move through the fourth quarter currently. A growth outlook of 2-2.5% for the fourth quarter is not enough to move the needle on US growth relative to stock prices and that is the concern we will the markets to validate or ignore as move toward the end of the calendar year.

The chart below is the weekly look for the last five plus years. The trendline is still intact  following the test last month. You can see a similar test in 2012 that resulted in a bounce and continuation for the index. Some anticipate the upside to continue the current trend and start another leg higher. We will remain patient and let this unfold going forward. There is plenty to like, but equally as much to worry about and that is why we have seen the swings back and forth for the index this year. For now the positives are keeping investors engage, but the negatives are always on the back-burner and to be watched. 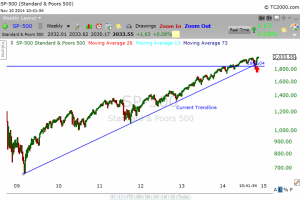 The key is to not confuse short term activity in the markets with the longer term time horizons. We will continue to measure risk relative to potential rewards, but the charts will always be the deciding factor on how we determine to exit or stay fully invested. Be patient and most of all be disciplined.

The following is our current allocation for 401k portfolios:

If you don’t have Fidelity S&P 500 Index Fund in your 401k you will have a S&P 500 index fund that is similar with Vanguard or whomever the assets are managed by. If you need help simply send us an email with your list of available funds and we will tell you the best match to the allocation. Info@JimsNotes.com is the email address.

If you would like to share this update with your friends, neighbors or co-workers please do so, but ask them to sign up for JimsNotes.com to receive this update and other information every month in their email box.

Remember, investing is a journey towards a predefined destination. Sometimes the destination changes, but it will always be about the journey, and the discipline it takes to get there.