Thought of the Day:

This is becoming a stock pickers market. Why? Look within the sectors and you have clearly defined winners and losers within relative to the individual stocks. Company news and analyst comments are moving stocks versus the market direction or sector direction for that matter. Apple was a key example on Wednesday as analyst downgraded and groused about the launch of the new phones doing nothing to help sales in emerging markets. The stock fell more than 5% in trading. Right or wrong, only time will tell, but the movement for the day was in the direction of the analyst. We have seen similar moves in Facebook (FB), Netflix (NFLX) and Google (GOOG) of late. If you are a trader you like this market environment… however, it does come with increased risk of being wrong. While correlation between stocks and the index is widening… so to is the risk associated with investing. Remember the old adage in carpentry…’measure twice, cut once.’

The S&P 500 index is still technically in the uptrend off the November low near 1350. However, the last four months have been nothing if interesting. The high on May 21st was 1674 and the close today was 1683 or a gain of 9 point. That is the perspective we need to have short term, the broad index can’t make a decision on direction and the indecision is prompted by news and uncertainty. Until we gain some clarity looking forward, expect more of the same. The push towards the August high is positive, but unless we clear the high at 1709 and hold, it is hard to hold investments longer term. Let the chart and the movement tell you what is going to happen, guessing only leads to frustration and anxiety.

Stock of the Day:

Today’s prize goes to Rackspace Hosting (RAX). The stock broke from a cup & handle pattern and has continued nicely to the upside. The progressions of targets looking forward are the blue horizontal lines. Storage space for networks remains a profitable business and this stock has made a solid turnaround both fundamentally and technically. 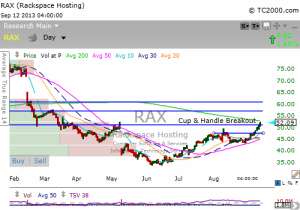 News Buzz of the Day:

The jobless claims released Wednesday morning, prior to the open, reported 292,000* new claims and was the first time since the financial crisis it has been below 300,000. Please note the asterisk beside the number… a government official stated that two states, one heavily populated and one other small, made changes to their computer systems that resulted in the claims not being filed on time. Labor Day also skewed the numbers. So, what was good news is now, I have no clue what the data means? The expectations were for the number to be essentially unchanged. More than likely that is where the number is.We will have to wait until next week to see how it pans out.

The other praise went to the budget deficit reduced of $43 billion for the month of August. However, the number is still $148 billion per month?? Isn’t that an annualized deficit of $1.776 trillion? Isn’t that where it has been for the last five years? I am glad it fell, but I am not throwing any parties either… the government can’t afford it.

Tomorrow is Friday the 13th and that should be interesting with options expiration and whatever superstitious implications that may have for the markets.

Chart of the Day:

Apple (AAPL) could have been the chart yesterday, but I wanted to see how it fared in trading today. As you can see on the chart below the drop of better than 5% on Wednesday went directly to support at $465 and held. On Thursday the gain on $5 or 1% on the day was a positive, but only validated the near term support at $465. Technically this would be a test of the break above this level in August, but short term it is a break lower from the pennant pattern from August 14th through the September 6th period. I would not be a buyer here, but I am willing to watch and see what the overall pulse is of the stock going forward. Note that the 50 DMA and the 200 DMA are crossing at the $463 level which could lend additional support for the stock short term. 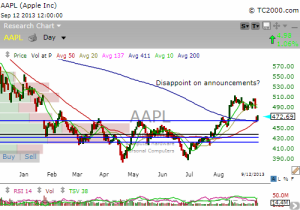 Bottom line… Markets are still attempting to keep the upside in play. The up and down movement intraday ended on the downside. Not enough to change anything, but enough to remind everyone that there is still a downside risk to the current market environment. Watch tomorrow relative to the options expiration, Syria, and speculation on the Fed.