The third quarter earning season is coming to a close and it is time to ask if we learned anything of value fundamentally that could impact stocks prices going forward? The first question on my mind is relative to what is driving earnings? If the drivers are shifting or losing momentum it will have an impact on future earnings unless it is replaced by another source of growth. I know I am attempting to be logical in an emotional world of stocks, and it is like the saying of don’t confuse yourself with the facts. I like to humor myself by at least putting it on the table and then we can see what happens going forward. First there is the issue of the stronger dollar impacting the exports from the United States. It will put pricing pressure on the ability to sell the same product or services and maintain margins. We saw in the IBM earnings this quarter the impact of the stronger dollar. The importance of accounting for this issue going forward is the Dow and S&P 500 indexes have better than 70% of the companies which are multinational corporations. Definitely something to consider the long term the dollar stays elevated.

A second concern is share buybacks which have been pushing earnings per share higher by having less shares in the float. With the indexes now at record highs… is the value still best used in buying back shares. There was decrease in this activity for third quarter and a declining number of announcements relative increasing the amount allocated to the buybacks or renewing them once they expire. We have also seen some increase in hiring and capital investments and that takes money away from the buybacks. Which raises the question, will the benefits of those investments reflect quickly enough to maintain or expand earnings growth in near term quarters? This is another issue on the table that warrants our consideration going forward. Fourth quarter earnings will obviously set the tone for 2015.

Energy continues to be a torn in the side of the market. What could be good news is turning into bad news. The lower price of energy is good for the consumer and companies manufacturing and consuming petroleum based products. The challenge comes in the expansion of the workforce in the energy sector with new drilling methods opening more opportunities, and the possibility that will stall as a result of oil getting too cheap. The cost to extract the oil would be more than it can be sold for and thus, stalling the process of expanding into new fields and opportunities. Remember that is speculation by analyst, nothing more. Throw in lower profits for the oil companies as a result of margins falling (that is reality) and you have the downside pressure building against the energy sector overall. Below is a chart showing the impact currently to the sector as the price of crude has declined from $108 to below $75 today. While this remains an open ended issue for the sector the pressure is building on the downside again and a test of the $77 support level on XLE is not out of the question. The short ETF DUG is the inverse of the one below and is in position to create a technical buy point if it clears the $49 level. 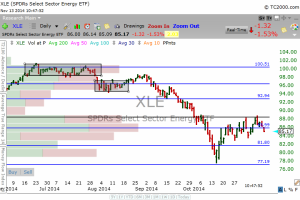 Gold is another commodity under pressure and has moved lower and attempting to hold support at the $109.70 mark. The bear flag pattern is holding for now, but the bias remains with the downside. Supply and demand economics are not in favor of the demand side and that is putting pressure on the downside. The speculation side has died with the downtrend working against any pontifications the analyst come up with. A strong dollar continues to work against any positive news as it works against the price of gold. Technically the pattern is pointing towards more selling. So why show the chart as something of interest? The downside could accelerate and offer a short trade opportunity for investors willing to accept the risk of such a trade. 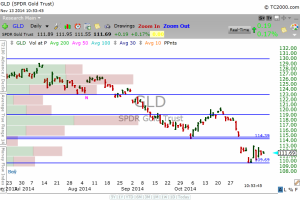 Utilities (XLU) are under pressure again on the downside. Since breaking above the last resistance at the $43.75 mark the ETF ran to a high of $46.50 and has now tested back to the first level of support at the $45.50 level. Two concerns here for the sector, first, interest rates rising are a negative for the stocks. The attraction for investors has been a dividend yield better than bonds worthy of the risk longer term. If interest rates rise that would, could and should have investors shifting money back towards bonds to mitigate their risk for equally attractive yields. Thus, if rates creep higher pushes money to other asset classes versus utilities. Less demand, lower prices which increase yields to attract investors back into the sector. Second, fundamentally the valuation of the sector is rich on a historical basis. The sector is trading at over 17 times forward looking earnings. We have not seen those valuations in nearly ten years. Thus, what is expensive doesn’t attract as many investors and if the first concern, interest rates, is realized… the valuation will be a double whammy for the sector and prices would erode. Stops are must if you own the sector currently along with managing your risk and exposure to the sector. 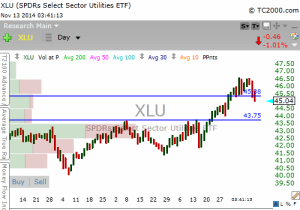 The market is getting interesting as we continue to see a topping or sideways consolidation in response to the bottom reversal pattern in play. Patience is the key and looking for the stories that are meaningful as they unfold.