No real decisions on the week relative to direction, but the we did manage to break below the 1430 support on the S&P 500 index. Friday ended the day with a test near the 1400 mark and a reversal. The question short term would be if it was enough to prompt a bounce or rally back towards the previous highs. Say what? Yes, that is what is looks like a set up for a short term bounce or rally. How can that be in the face of data that is not worthy of the current prices? Simply put… the Fed and global stimulus is still at work. Remember, the trend is what matters both short term and long term when looking at markets overall. Thus, we will have to spend time this weekend evaluating how to set up our week and what we want to trade in the coming weeks.

The earnings theme remained at the forefront with much the same results. Revenue has been the challenge for many of the companies and earnings misses by Apple, Amazon and others kept the market from gaining any real traction on the upside. Looking to next week there are plenty of earnings to watch, but the theme has been set in place. Those beating or providing solid guidance looking forward will be the winners, while the balance struggle to maintain their uptrend. Those that miss like Chipotle Grill (CMG) will loose significant ground.

The economic data remains on the weak side with some signs of life. Weekly jobless claims moved back to the 370k level.  Durable good top-line number looked good on aircraft, but the bottom line was weaker. Housing data remains on the strong side as continue to see improvements.

Amazon reports a loss on the quarter… revenue was in line, but the loss was much bigger than the 7 cents per share estimate. The stock sold off more than 10% on the news, but has bounced back to down 2% as I posted this update. Watch the impact tomorrow to the broad markets. Consumer sentiment is okay. But the big surprise was the Q3 GDP showing 2% growth on Friday? Really? Strong consumers spending and increased government spending were credited with the increase. The government number is disturbing, but believable. Regardless the data remains on the flat side. If we are going to see stock prices rise we need improving economic data going forward.

Commodities remain under pressure on the downside. Oil fell to $86.24 per barrel. A test of support at $85 held, but the downside is definitely in play. Our short play on crude has worked out well. Gasoline (UGA) fell as well finding support at the $54.20 level on Wednesday. Small bounce and worth watching next week. Agriculture moved back to support and worth watching on the downside if it breaks lower. Base metals are struggling to hold support an are setting up to move lower. Precious metals have not been any better with both gold and silver moving below support this week. Not a sector overall to be long currently.

Speaking of commodities the food costs continue to rise. One report shows the cost doubling since 2002. The partial blame is being given to derivative trading. However, population growth and the rise of the middle class in developing countries have done their share to the cost of agriculture commodities. This is a long term problem that will have to be addressed going forward. Thus, there are opportunities for those who are patient investors in the sector longer term. Worth digging to find the winners relative to food production.

Bottom line… things could still get worse before they get better. Scanning the sectors and the headlines shows negative sentiment remains for the broad market. We are still concerned about the downside risk near term, but I expect some kind of bounce from the broad indexes. The intraday reversal on Friday could play out early in the trading week. Be disciplined and manage your risk.

Still looking for some level of support to hold and a bounce in the broad markets. Earnings have kept the bounce from taking place last week, but look for a bounce off the lows, but the continuation of the move lower should follow as the economic and fundamental data are not improving enough to shift the confidence factor for investors.

Telecom was one of the leaders prior to the selling. Watching to see if their is any leadership left in the sector moving forward. T, VZ, QCOM and IEZ all worth watching going forward.

McDonald’s testing the June/August lows again. The downtrend remain in play, but a test of support could provide a upside trade short term.

NASDAQ 100 Index on the downside. The break lower is looking for support? Watch the 200 day moving average. The indicators are reading oversold short term which puts the bounce opportunity in play. Watch QQQ on the upside.

China has been moving higher as investors like the outlook. Watch for a test of the $36 level currently. If we hold, establishing a position is the goal. Thus, far no follow through test on the downside, but looks ready to move higher.

KBE – watch the banks to hold support and bounce? So far holding and worth looking at the trade opportunities.

Gasoline – UGA – Bounced off the $53.60 mark as support? Watching the reversal short term for a trade on the upside. Potential trade set up at $55.75.

Apple – (AAPL) Watch the impact of their earnings announcement on the downside of the stock. Test $585 or 200 day? Only tested $591 on Friday and the downside is in play, but plenty of buyers still wanting into the stock. Trade opportunity? $613 entry is tradable to $635.

Technology – More downside building off the earnings reports. The selling is still strong in the sector.

S&P 500 Index / Sectors-to-Watch – The topping pattern from August is providing plenty of support to the broad index currently. On Tuesday we broke support at 1430, but the fall has not been significant at this point, but it has everyone’s attention. The break lower from the consolidation pattern remains in play, but the selling has stalled for now. The downside gained traction as investors worry about the US economic picture worsening, and the consumer being challenged on the outlook. 1386 is the number we posted for support based on the break lower from the pattern.

The Scatter Graph below has a starting point off the high on 10/17 which is the current pivot point off the high an move lower. It is important to note the six sectors are above the index and four below, but none have more than a 1.6% divergence from the benchmark. That indicates no volatility or leadership in the index short term. We need some leadership from somewhere, up or down. Thus, we head into the week looking for a catalyst for the broad index up or down. 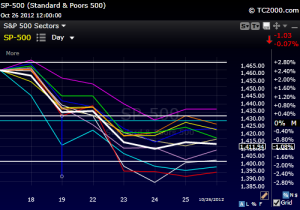 The activity on Friday provided no clues as financials headed lower with the banks shifting on the government lawsuits, and telecom bounced from the selling to lead the upside. No significant leadership and that leaves us heavy in cash on the S&P 500 model with a short position still open against the index. We remain patient for now and take it one day at a time.

Financials – The index is attempting to hold the uptrend and support at $15.80. The 50 day is just below for support as well. Earnings were ok for the quarter and the large banks should continue to benefit from QE3 stimulus. Currently the cloud is the government lawsuits. Watch and be patient with the sector.

WATCH: XLF and KBE on the bounce off support.

Energy – Broke support as crude continues to move lower and towards the next level of support. We established the short play on the drop lower.

Healthcare – Broke short term support on the index and looking to hold the 200 day moving average and bounce back.

NASDAQ Index – The index has been under pressure from the large cap technology stocks selling, and earnings on week didn’t help matters. The shift lower brought the QID trade back into the picture on Friday at break of $66.60 on QQQ. Manage your stop on the downside play. The index caught some support on the 200 day moving average. Watch for the upside bounce potential if the buyers step in. Thursday earnings may prevent the upside short term.

Dollar – The dollar, like stocks, is being pushed up and down based on the daily sentiment towards Europe and the global economic picture. The downside pressure on the dollar abated as fear has crept back into the global markets. Watch the bounce on the buck.

WATCH: UUP – back to the top end of the range.

Treasury Bonds – Another attempt to make break above the downtrend line off the July high failed again. Watch to see how this plays out short term with $120.80 support. Investors still can’t decide the direction.

WATCH: DBB – The downside or short play of DBB has been the winner! Watch $18 for support and bounce.

WATCH: UNG – In trading range and patiently working through the lack of direction short term.

6) Real Estate (REITS) – The sector tested the recent high and support at $64 (IYR). Watch your downside risk if you still own this sector.

WATCH: REM – Downside back in play after the short term bounce. Held $14.45 support.

WATCH – NLY – Downside back in play after the short term bounce. Held $15.70 support.