We have discussed the impact of news, events, technical and fundamental data on charts and how to use this information in our day-to-day management of our money. Today was one of those days that provided plenty and I find it appropriate to look at a few charts to interpret the impact and what opportunities, if any, may lie ahead. The first chart below is the biggest news item of the day… crude oil. The close of $61 per barrel was prompted by the EIA supply data which showed a build up of 3 million barrels versus a decline of 1.5 million expected. That added to the belief factor that OPEC, Russia, USA and Iran are going to have to address production going forward. While all are reluctant to do so the impact on crude prices is obvious. The chart is USO, United States Crude Oil ETF and shows clearly the decent in price has accelerating over the last two weeks. This is both an event and news item impacting stocks on the day. The technical move in the charts was equally important to determining our response going forward. The intermediate term trend for crude is down as seen with the top established in June. This is clearly a commodity to avoided or have been short the last four to five months. 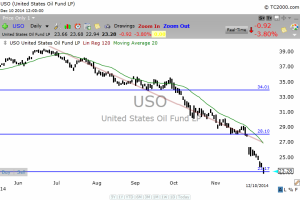 The next chart is the energy sector (XLE). The direct impact of oil prices on the broad sector has been apparent since the peak in price in June/July timeline. The more believable it became that the sustainability of the downtrend in crude prices would stick the greater the acceleration in price on the downside. The bounce in October was on the hope that oil had settled near the $67 level. As you can see that didn’t hold true and the downside in the stocks have now accelerated lower again. Likewise this has been a sector to avoid or have been short since September. 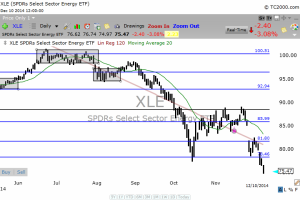 The event relative to oil prices moving lower has been mostly ignored or brushed off by investors as a temporary event and not one that could sustain itself. The simple fact that China was developing and consuming more crude as their economy expanded was enough for most traders. But, the lower the move in crude and the more chatter about the economic impact globally to Russia, Iran, Brazil, the emerging markets, etc. etc. the more investors started to worry. This is called uncertainty. Because investors can’t come to grips with what might happen in reality they wait for speculation to evolve and then the data to confirm the reality of the speculation. That in turn results in a reaction to what they now believe to be true. This leads to the a higher level of volatility in the markets. Thus, the next chart is the VIX index for the S&P 500 index. This measures the uncertainty in the markets very clearly as seen below. VIX spiked to 18.5 on the close Wednesday. 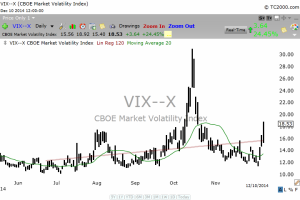 This of course leads us to the chart of the S&P 500 index. Below you can see confirmation in the price of stocks to the VIX index. Thus uncertainty equaled selling on Wednesday. However, it is more important to note the correlation between the price of crude and the drop in the energy sector ETF versus what the broad market index was doing during this same time line. 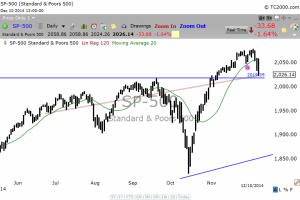 The only drop in the index came from worries about the Federal Reserve hiking interest rates sooner than originally anticipated. The spike lower in September/October on the chart correlates to that event/uncertainty. The VIX index above shows the spike higher correlating to the drop in the index. Thus, we get a very clear picture how news and events can create uncertainty relative to stock prices short term. As the uncertainty around the Fed proved to be unfounded stock prices rose back to their previous levels. That event created a great opportunity. Applying that same thinking to the current event of crude oil prices the question begs where the opportunity will be and, equally important, when it will be. We don’t know the answer to either of those questions, but watching the chart and listening to the news surrounding the event we will be given plenty of notice when the all clear signal is sounded. First, we need the S&P 500 chart to return to normal along with the VIX. Thus, to break the question down further… is the worst over for the index or the VIX? If we have a continued move higher in the VIX as it relates to the uncertainty of higher crude oil price and their impact on the US and global economies, won’t the S&P 500 index continue to move lower as well? All good questions and all will get answered as we proceed and either confirm the worries or invalidate the speculation. Patience is the key.

The issue surrounding oil prices currently are still speculation. Until we gain some hard facts we can hang our hat on we have to proceed with caution and respect what the charts are telling us relative to the data. One additional piece that will be forth coming is next quarters earning reports in the energy sector… it will unfold a story that will be key to the longer term impact of prices at these levels… earnings! How big of hit will they take relative to the squeeze in margin? We will keep watching for the events of this story to unfold and the opportunities to be revealed.