The new trading week starts off with the teeter-totter tipping towards the buyers. As stated below the stimulus help in China and the news from Europe starting the stimulus push sent the US markets higher. The dollar was lower, oil fell, gold struggled and utilities jumped 2%… it was a day of what was wrong is not right. News driven markets are choppy at best and the ups and downs will make you dizzy. Some of the topics on the day are discussed below, but the key factor still remains patience… don’t eliminate the word from your process as the Fed plans to do at this weeks FOMC meeting. You and I still have to practice patience as the dust settles and we gain clarity in direction.

China promises more stimulus to keep the economic engines running by the government. The Shanghai index closed at a its highest level in five and a half years. What all of this will entail and how much of it will actually be completed the promise of stimulus is all investors want to hear these days. Speaking of stimulus, Europe was higher on the day as well as the belief stimulus is helping the European Union recovery from the current economic slump. Everyone is happy and the S&P 500 index responded by gaining nearly 1% in the first thirty minutes of trading. How it handles the move is of equal importance from my view.

iShares S&P Europe 350 ETF (IEV) was up 1.3% after bounce off the last weeks low and test of near term support. The trading range off the October lows remains in effect can the fund would need to clear the 200 DMA to show positive momentum from my view currently. A move back to the 200 DMA may well be a short term opportunity as this all unfolds. 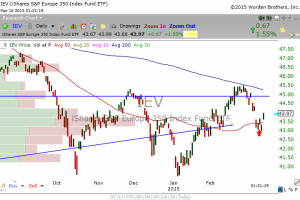 iShares China 25 ETF (FXI) equally made a solid move on the news today. The move back above $42 solidifies and confirms the bounce off last weeks low. Technically the fund is attempting to recover the previous uptrend off the October lows. Believability of the news and events is the bigger issue with China. For now the buyers like what they hear, but I am more inclined to buy with a short term time horizon and keep my stops in place to prevent any downside surprises. 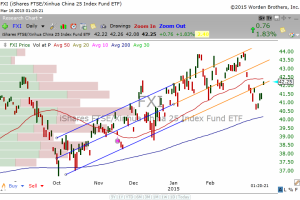 Patience is in all the headlines currently… however, it is not about you and I being patient investors, it is about the Federal Reserve eliminating the word from their FOCM statement relative to increasing interest rates. I would say they have been patient enough on this front and the sooner they address the issue the better. The market wants and needs clarity on this issue and it is time for the Fed to step up to the plate. All eyes will be on the Fed this Wednesday to confirm the news that is being speculated about impatiently.

Where is the rotation to the small cap stocks? This was all the chatter this weekend, but the Russell 2000 index trailed the Dow and the S&P 500 indexes today. I am a believer in the small caps long term based on the Fed following through with the interest rate hikes and the green back (dollar) remains strong relative to other currency. Not to bring up a sour subject, but we need to be patient as it unfolds longer term. Don’t get myopic on this happening overnight. 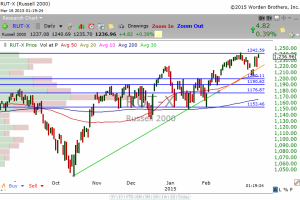 Crude oil hit new lows at $42.79 in morning, but managed to bounce off the lows throughout the remainder of the day. OPEC stated that the US oil boom could slow by the end of the year as production is taken off line. It is assumed that was the ultimate goal by OPEC as they continued to produce at their cap/max quotas by country. Without getting into the politics of price controls and market manipulation we will suffice it to say that getting cost down is a key focus to US drillers and suppliers. Technology has come a long way the last five years and it will advance even further going forward. The challenge is competing in a marketplace that is controlled by players on a different level relative to labor and drilling cost. This battle is far from over, but for now the price of oil continues to decline and the only trade is on the short side. As with all trends it will eventually change, but I am willing to let the chart and price tell me when that is versus attempting to be prophetic and attempt to pick a bottom. 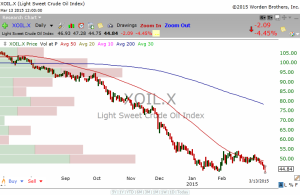 Tonight’s webinar will cover the opportunities in the financial sector going forward. If you miss the presentation you can request to see the archive through joining JimsNotes. com free update service or send an email to don@jimsnotes.com.