News driven day heightens fears and markets move lower. As an investor we all know that news is an event and has a short term impact on the markets. However, when the news in the headlines it seems more dramatic to the financial markets than it generally pans out. The threat of harder sanctions on Russia had pushed the futures lower, and then the news of a passenger plane shot down over the Ukraine sent the indexes even lower. The question is will the news and horrific event (rebels killing 298 passengers on a Malaysia air flight) send the markets even lower heading into tomorrows trading day? Not a question many of us want to ponder in light of the event itself.

Some thoughts on the situation are as follows… First, investors are already nervous over the contemplation that prices are too high on stocks. According to Ms. Yellen biotech (down 6.2% since comment) and social media (down 4.4% since comment) are the two worst offenders. The word bubble has been thrown around more than quantitative easing last year. Second, does the worries over the price levels reach a tipping point as a result of the news events and geopolitical strain? Third, how will the institutional money respond? Fourth, and last, can yields on bonds really move back below the May lows producing yet another bond rally?

Despite higher oil prices the energy sector forfeited Wednesday’s gains. That would lead me to believe the rise in oil is speculation relative to the geopolitical issues in Russia/Ukraine. That could lead to another test of the $100 level of support assuming the Russia issues are resolved peacefully.

My long winded point is simple, thinking you know what the markets (investors) will do during news/event driven periods is foolishness. Trading news is better left to others. I am more worried about the protection of my principle than guessing right on what event of the day will take place and impact what sector of stocks. It is important to maintain your disciplined and focus on what is important to the accomplishment of your goals and not the new event of the day.

Lost in the days events was economic data and earnings, the previous drivers of direction. The housing starts were well below expectations and the homebuilders fell 2.5% on the day. Weekly jobless claims continued lower and the Philly Fed manufacturing report joined the Empire State number showing solid growth. The challenge is holding the belief in the future economic improvement in light of the current data points. This is the exact issue that has been creating the uneasy sentiment towards valuations and “bubbles”. Earnings were equally as mixed with Microsoft cutting 18,000 jobs and writing off $1.7 billion in the process. There were some ugly numbers in the regional banks and other announcements today as KRE fell 2.3%. This all adds up to a cautious tone and warning. I am not jumping to any conclusions on today’s news and data, I am only stating to use your stops, manage your risk and remain disciplined.

The chart below of the volatility index shows the response to the days events. The breakout will now be challenged in the coming days relative to the buyers. Do they step back in and buy the dip or does the downside continue. Both are good questions that will be answered in time. Don’t attempt to make a guess on the direction let it unfold and then take the appropriate action. VXX was up 9.7% on the day as a result of the spike higher in the VIX index. 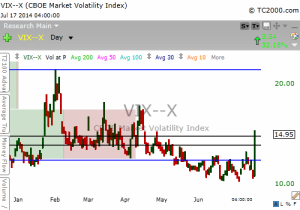