If pictures don’t lie, then what is the chart of the S&P 500 index telling up about the broad markets? The uptrend is still alive and well for one, and the index is at a new high to add some frosting on the cake. Technically all systems are go and fundamentally they have improved. The argument on valuation is up for debate as statisticians twist the data to sway you to their way of thinking. All things said, there is nothing except for outside markets events (Russia and Ukraine for one) that are in play to rattle investors as they continue to push prices higher in belief all is well. Thus, the story is built on the belief the economy is improving and the outlook for growth remain to be a driving component. The one wild card to all of this remains the Federal Reserve and how they will handle interest rate hikes next year. If that is the April or May time frame then October/November will be when we cross that bridge relative to the markets concern. For now you just take what the market gives and remain focused. 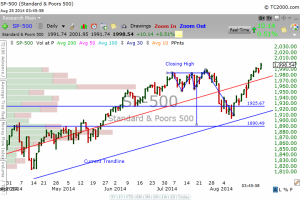 Looking at the leadership today it was the biotech sector (chart below) pushing the indexes higher. We discussed in the weekend update this sector was one that was hitting against resistance following the reversal on August 7th low. IBB moved above the $266 resistance and gained 2.2% on the day. We will look for a follow through to confirm the move higher and $274.35 as the next resistance from the February high. The leadership from this sector is pushing healthcare (XLV) higher overall, and pharmaceuticals (XPH) are progressing on the bottom reversal in play. 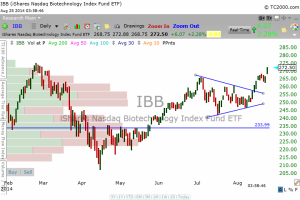 The financial stocks (XLF) continue to move on the ripple effect of Bank of America settling the mortgage issues with the Justice Department. Despite the huge settlement upgrades to BAC have pushed the stock higher along with the likes of Wells Fargo and Citigroup. KBE broke the micro downtrend and is working on the $32.75 resistance mark currently. If the sector can maintain the upside momentum the S&P 500 index would be a big benefactor due to the weighting in the index with financials. XLF is resuming the move above the key resistance point at $23 and this could provide the catalyst for a move towards the $27.25 longer term target. Worth watching the whole as well as the parts.

The new home sales data released this morning offered a renewed disappointment for the housing sector. Sales fell 2.4% in July to an adjusted annual rate of 412,000. Expectations were for 430,000 and that erased the upside gains of better than 1% on the news and ITB closed down 0.5%. I would have to argue the data is lagging as the starts and pending sales data were stronger than expected last week. Worth watching how this plays out short term. I still like the sector and the outlook considering that interest rates remain favorable for the near term.

Speaking of interest rates… they continued to decline today with the ten-year at 2.38% and the thirty-year at 3.13%. This remains of interest as bonds continue to find money rotating towards safety. Europe is some of that as we have discussed, but there is definitely a disconnect between what is on the horizon from the Fed and what bond buyers believe. All you can do is follow the trend, set your stops at the risk level you are willing to accept and let it go.

More economic data on tap tomorrow with the durable goods orders due along with home prices and consumer confidence. We continue to take what is presented and follow the trend. Trying to be smarter than the market only end poorly. Stay focused.