Follow the bouncing ball… one day up, one day down, one day sideways… no direction and watching is the best course of action for now. Utilities and Financials were up more than 1% on the day helping the S&P 500 index close in positive territory.

Running scans late in the trading day showed the rise of the global or country specific ETFs. The rotation towards the global markets is becoming attractive an alternative for investors. Russia was higher on the day as a result of the removal of some troops from Ukraine hot spots. RBL gained 4.8% on the news. EWZ was up 1% and continued to follow through on the break above consolidation.  The scans are pointing to opportunities for those will to accept the risk of the global markets.

Yellen continues to keep the world on its toes as she testified today before Congress on the state of the economy. The response was up and down depending on the point she was attempting to make. I will say for the record she did nothing to instill confidence in me that the Fed or any economist around has a clue what is going on or how to address the issues in the economy today.

As I have stated for the last several weeks the challenge still lies in confidence factor relative to the growth in the US economy. Plenty to worry about, but some remain optimistic. I still believe we have to be patient and let all this play out moving forward. Patience is best in market cycles like the current one being played out.

The NASDAQ Composite index continues to work on the head and shoulders pattern and 3990 support. Early selling today took the index to the 4021 mark before moving up to close down only 13 points. The challenge for the index are the small caps, biotech and technology sectors. Growth is moving out of favor and value or safety is moving into favor. Watch to see how this plays out in the short term moving forward. 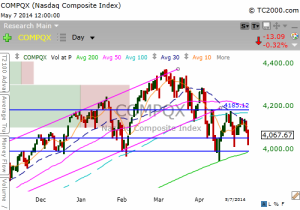 The markets are still uncertain on direction. The shift from the Russia/Ukraine worries to some hope of a resolution added to the optimism towards stocks today. Was it enough and will Russia follow through. Those types of worries are weighing on the markets short term. Economic data has been improving versus the winter reduced growth in February and March for the US economy, but not anywhere near what some expected on the recovery. That is causing havoc mentally for investors. Until the picture clears it will remain a focus for investors. Stay focused and remember that cash is a sector and sometimes the best trade.