More indecision on the day as investors rush to sell technology stocks and hold large caps. Maybe the rational is that higher interest rates will impact the social media and internet earnings. Not sure, but from my view there isn’t a correlation between the two. However, the idea of taking profit from the leaders on fear of stocks moving lower going forward would make sense. Either way you would like to justify the move money was being taken off the table. We closed below 1 988 for the second day on the S&P 500 index and the NASDAQ  closed below 4552 support. Small caps break the $115 support on IWM and all things considered it was not a pretty day for the major indexes. The question looms… how far do we drop and how much influence will the FOMC meeting have on Wednesday? The jury is still out and it is important to take the precaution necessary to manage risk.

Technically the charts have been showing a topping pattern or consolidation near the highs. As you can see on the chart below of the S&P 500 index and the break lower on Friday was a negative sign for the index. The follow through today doesn’t help, but the selling lacked any real downside conviction for the major index. In fact, looking at the ten sectors of the index shows a lack of leadership on the downside currently. Energy had been leading the downside mix, but was the leader on the day posting a solid gain along with the defensive sectors of consumer staples, utilities and basic materials. There were no definitive moves on the index, but we have to keep an eye on the downside as the bias is leaning that direction short term. 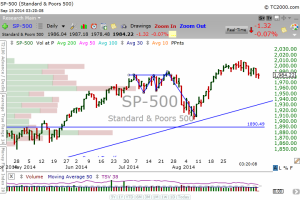 The growth stocks struggled on the day as the sellers targeted the one part of the market which has performed well, but is seen as a sector that will struggle should the economic picture suffer at the hands of the Federal Reserve. Thus, sell now and ask questions later seems to be the path of least resistance currently. If the sellers fail to maintain control of the direction near term the sectors selling will offer some upside benefit. The chart below is the Russell 2000 Small Cap ETF (IWM) and the break of support at the $115 level today was one sector that suffered at the hands of the sellers. The break of the $115 level gave the upper hand to the sellers, but we did hold the 200 day moving average. There are negative signs relative to the move, but it has not accelerated to the point of panic. Let this unfold and the opportunities will present themselves clearly. 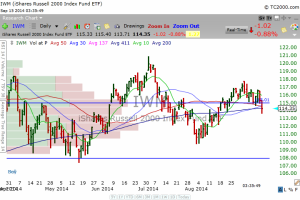 As we discussed on Friday the Fed is taking center stage and my guess would be it does not matter what they do it will not please everyone. The challenge with the Fed activity is it will produce a speculation reaction and it will take time for the true benefit or detriment to the markets to develop. Any Fed activity takes time to work through the economy and to impact the overall marketplace going forward. That brings us to our favorite phrase… patience is the key ingredient as this all unfolds.