More selling as investors deal with a miss on the new home sales for August. However, prices did rise more than 11% year-over-year. That was the single highest monthly increase ever. The news from Europe got most investors attention as Spain plays games with the bailout process. This is a recurring event in Europe, but the results never fail to spook investors. This is the pullback test we have discussed and based on the current move it may cut deeper than originally thought. Watch and manage your positions accordingly.

The volatility is coming from the uncertainty in Europe and the US economic picture. The VIX jumped to 16.6 on the day up more than 8%. VXN, the NASDAQ volatility index was up more than 7% on the day as it bounces off the lows near 14. If the tick higher in volatility remains expect more selling in the broad markets.

S&P 500 Sectors-to-Watch – The index is eroding with modest selling. The drop off the 9/14 high as been 2.1% and it has succeeded in gaining everyone’s attention. The impact of the stimulus amounted to a one day event  and all the comments since have been on the negative side. The chart below of the 10 sectors shows the last pivot point on August 30th and the current reversal. Telecom is still the leader, but has clearly turned lower, but then so have all the sectors.

The S&P 500 index (bold white line) shows the move lower following the lateral movement. There isn’t a clear direction for the broad market index, but the downside is starting to exert itself. Since the 9/14 high we have seen gradual weakness across the sectors. The sectors holding up the best are Healthcare, Telecom, Consumer Staples and Utilities. The worst performers are Basic Materials, Industrials, Financials and Energy. Today Utilities was the only sector to finish the day positive.

The worry factor is growing and we raised our stops, hit our stops and are managing our stops relative to the positions in the S&P 500 Model. I added an entry point SH as a short position or hedge in the Model. We are starting to see the negative sentiment I have been reading about in the charts, and they are beginning to reflect some warning signs. Thus, don’t over think what you hear, adjust your stops and keep looking forward. 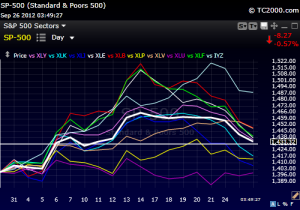 Financials – Bounced off support at $15.45 today. Watch to see if it holds this level near term. If we hold a trade on the upside is what we are watching for on a bounce effect in the broad markets.

Energy –  Broke below $73 support. If we follow through on the downside looking to get short the sector with DUG with the entry at $21.

Telecom – The leadership of the market tested lower again on the day, but the uptrend is still in effect. Watch for the opportunity to put the play back on with a reversal back to the upside.

Healthcare – The sector continues to push gradually higher, but is testing the move today. We moved above $39 (top of the previous trading range) and the current leg higher remains in play.  IHF and IHI have both provided the leadership as they hit new highs, but are in the process of testing as well. Pharma is still struggling and XPH is at key support near $59. Hold positions and manage the stops.

Semiconductors – The sector has been testing lower and the downside leadership has been from Intel. The sector remains weak, but has been consolidating and looking for direction. The direction showed up in selling over the last week plus and the short plays have developed. Watch the Intel play as we raised the stop to be tight if the bounce occurs. SSG stop is adjusted as well.

NASDAQ Index – The index has been under pressure from the large cap technology stocks selling. Apple is looking for support as it sells further on what would be profit taking. Watching the short play with QID as a trade on the current weakness in the sector.

Transportation Index – This remains a troubling chart for me. If stocks are going higher short term why is this sector moving lower. If stocks are to move higher this indicator needs to track with it eventually. Support on IYT was broken on Friday. $86.75 is the number to watch short term. If we break below this level watch for stocks to react overall.

Dollar – The dollar bounce is back in play as worry over Europe and global growth moves to the front of the list.  We continue to look for a bounce off support and then a resumption of selling, if the markets return to the uptrend. Be patient and see how this plays out.

Treasury Bonds – TLT sold to $118.25 on the stimulus announcement. That support level held for and the bounce off the low is gaining momentum. The catalyst to move higher was be worry/fear relative to growth of the global economy. That is definitely a potential relative to the situation in Europe and China currently. We are willing to take a small position if TLT moves above $122.45.

4)  Commodities: Gold sold lower today over the worries in Europe. The break lower may be temporary, but we have to watch and see how it play out from here. Gold miners bounced back from early selling as well. Silver sold early, but held support on the bounce back.

DBA – took break below the $29.50 level as agriculture sells overall. Watch the downside risk as it builds.

DBB – Base metals were selling towards support at $19.44. Took exits from the sector, but looking for a bounce.

OIL – Moved lower as crude closed at $90 support. Watch the downside play potential if Europe continues to create unrest in the markets.

5)  Global Markets: The global markets have resumed selling on the worries in Spain and Greece. The rise in concerns is pushing the sector lower as well. Hit the stop on EFA today and we will watch to see how this plays out short term.

Brazil Small Cap – The country ETF has continued to progress in the uptrend off the July lows. We continue to monitor the play and have tightened our stops as sentiment globally shifts.

6)  Real Estate (REITS) – The sector moved to new highs, but has sold in reaction to the stimulus. I like the outlook long term, but the short term is experiencing volatility and selling. The sector is breaking down further and now is at $64.20 support? Watch your downside risk if you still own this sector. But, look for support to kick in soon.

How much negative influence will Spain have on the current uptrend in the European markets? Last week the worries escalated on Thursday, but there was positive news on Friday? However, nothing was officially announced all rumors. The real answer will depend on the deal with the IMF and the ECB. EWP tested, but bounced on Friday. Until there is a definitive plan announced the moves are speculation. (Some answers today on how much the issues can impact the market globally and domestically in the US) Still all rumor driven, and we will continue to watch near term.

China was moving on infrastructure stimulus, but the spat with Japan has derailed the progress along with economic worries. Watch FXI as the up and down impact of news creates some short term volatility. This story will unfold into a upside play if the stimulus works or a downside play if the sentiment shifts. (Wednesday saw a shift on the downside as we broke support and moved back below the 30 and 50 day moving average.) Still looking for the directional trade as this all unfolds.

Attention will turn towards the election soon and certain sectors will start to react to whoever is leading. For now that is Obama and as we get closer to November investors will factor in specific policy events they believe will influence the markets. Healthcare is one sector responding currently on the upside to the news. One to watch is the tax hike on dividends (from Obama). Long term it will be neutralized by the Fed keeping rates at zero, but shorter term it could create some opportunities.

QE3 was good for stocks to move higher short term, but what about the future? Inflation is one concern reflected in the precious metals prices jumping higher, and what does this action really say about the economy for two. The latter is a bigger concern from my view going forward. The Fed is essentially stating the economy is in enough trouble we need to take more action towards fixing it. This is where we have to be aware that stocks may move higher now in response to the stimulus, but as the economic data is reported we have to prepared for a correction or pullback in prices (This is what we are experiencing currently as the numbers are not impressive.)

What am I watching now:   Leadership relative to the move Thursday (9/13) following the Fed Stimulus release. Scanning this weekend the following are the trade-able leaders:

Treasury Bonds (TLT), Short Semiconductors (SSG), Short Real Estate (SRS), Short Financials (SKF), Short Oil & Gas (DUG), Healthcare (RXL), Biotech (XBI) and Telecom (IYZ). The short plays continue to lead in each of these this week. The others have turned into laggards due the downside pressure. Adding any of these as trades this week would have worked on the downside.

1)  BAC – Bank of America to move towards the target of $10 short term. Broke support short term, but in position to potentially play a bounce move higher.  2) Oil sitting on support at $90. If breaks short play gets interesting. Held support today and we continue to watch.  3) Downside sentiment shift. If this plays out the risk to the overall market grows. The short term shift this week is in play and we need to watch how it plays out next week. 4) IP is breaking higher and worth watching on the upside. 5) SIVB is breaking higher in regional banks and worth watching.

The list above is lagging as the week has been negative thus far. We are looking at the downside and the models do reflect several short plays for the current move. Market is in a precarious place. Watch, set in place your plan of action and let the cards be played. Don’t assume anything.