The market continues to raise questions as the activity continues to be controlled by the news. Unfortunately most of that news is the fiscal budget issues from Washington. If that was out of the way it would be very interesting to see how the market would trade. But, it isn’t and we have to play the hand we are dealt. We could play what if until we are blue in the face. The focus is on the broad indexes holding ther move higher from the start of the week and getting through the maze of question marks. With that in mind what are we watching now?

Crude oil for one has my interest. As I stated in last nights video update we have moved back to the top end of the defined trading range. That puts crude at $89.75 on the close. Looking at OIL we see the close was $21.34 and in position to move to a target of $22.25 – 22.72 if the momentum remains. That would be a tough trade to take as the supply/demand issue isn’t validating oil going to $100. One reason for the move, my opinion, is the dollars continued decline of late. I am watching how this plays out tomorrow and then we will look at if it makes sense to trade. It will be posted to the Watch List on the ONLY ETF Model if the trade develops.

Interest rates rose to 3% on the thirty year Treasury bond on Tuesday. That is an move from 2.72% on November 16th. The result has been for TLT, iShares 20+ Yr. Treasury Bond ETF to drop from $126.48 to $120.51 or 4.7%. Doesn’t seem like much, but it is enough to catch the attention of investors. We have owned TBT, ProShares UltraShort 20+ Yr. Treasury Bond ETF to play the downside move. But, to take this one step further is to ponder the impact on the housing market? Will rising rates impact the resent buying? Will the homebuilders be impacted by this move. The chart below pairs the move in TLT (green) vs XHB (white). The two lines were coming together the 4th – 11th of December, but then widened out again on the 14th. From my conclusion currently the answer is there isn’t a direct impact on the downside in housing currently, but there should be if rates continue to move higher. If XHB starts to trade in unison with TLT then it will show a negative impact on the homebuilders and a cross of the two lines would show a negative correlation of interest rates on the housing market. Another clue would be in the mortgage origination data. Definitely worth keeping on a watch list going forward. 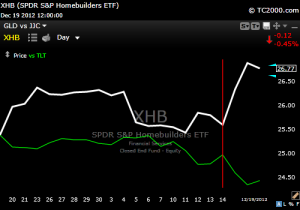 Banks have been in the news with upgrades and promises of growth. I have been a fan of the sector for over a year. In fact, last December I participated in an outlook for 2012 article and picked banks as my number one sector and Bank of America as my number one stock in the sector. KBE is currently up 21.9% and BAC is up 101.2%. Not bad for a couple of tough picks. I have been asked to participate again for 2013 and I am not convinced I wouldn’t pick the same two positions. That said, watch the near term for a pullback or opportunity to buy this sector at lower levels. The upside is definitely in play, but they could be ahead of themselves due to all the media attention.

Some miscellaneous thoughts to keep this post from being too long. Technology has bounced off the recent lows at $27.62 with semiconductors (SMH) leading the way. But, software (IGV) and networking (IGN) are both adding on the upside. Oracle (ORCL) beat earnings on Tuesday adding to the upside on Wednesday. Microsoft (MSFT) wants to move above resistance at $27.75 as the stock establishes a base. Watch these stocks and the sectors moving forward. Healthcare (XLV) is worth watching as well as it hits against the October highs. Pharma (XPH) is the best looking component short term relative to valuations following the big sell off in October. Last, but not least watch the number of stocks trading below their 200 day moving average. They are declining supporting the current trend and some of these are attractive opportunities as well.

The market is still in an emotional upswing and it wants to go higher. Investors want to believe the fiscal cliff gets resolved and that money continues to flow towards stocks. Right or wrong the trend is higher. Despite some selling on Wednesday we have to break the trendline on the downside for this to change. We remain heavily invested, adjusting our stops and taking what the market gives one day at a time.