The market starts with a positive bias in the futures, but at the open stocks moved lower and stayed lower on the day. We did experience some intraday attempts to move higher, but in the end the S&P 500 index did well to get back above the 1538 support level on the close. The downside is still in play! It is equally important to note that the close on the S&P 500 index closed below the previous low setting in motion a trend reversal. Watch closely to see how this plays out and if the short opportunities continue to build.

After hours MSFT, GOOG and IBM announce earning. Microsoft earnings rose and the stock was up after-hours by 2.8%. That was in the face of a downgrade by Goldman Sachs just a week ago. That is a positive. Google beat estimates as well, but revenue was on the short side (sound familiar?). The stocks was up slightly after-hours. IBM was the big disappointment. They missed both revenue and earnings on the quarter. In this market that is not a good thing, and the stock is trading down almost 5% in after-hours. Look for the IBM news to impact the Dow in the morning as it accounts for approximately 11% of the index.

Verizon jumped more than 2% on the day at it stated it activated 4 million iPhones in the March quarter. The news was part of the earnings release from the company which beat estimates. A total of 7.2 million smart phones activated for the quarter. What does this say about Apple for the quarter? We will know next Tuesday for certain, but there will be plenty of speculation over the next few days. Apple closed down 2.6% to break the $400 level. The short trade continues to work on the stock.

The markets opened lower and never really looked back slowly progressing to close down on the day.  The trendline support was broken on the close as the next negative for the markets. That sets up an interesting day for tomorrow. No clear indication of selling continuing at this point, but the bias is shifting . The short plays for trades are setting up as nicely.

The jobless claims moved higher as one more negative for the markets. Philly Fed falls again missing expectations and Leading Indicators were worse than expected. The misses keep coming! Bad news is building on itself.

The chart of the broad index is starting to look more like a heart monitor than the market. The ups and downs since March 14th have made me sea sick.  The index was at 1563 on August 14th and it closed at 1541 today. The downside or potential trend reversal is setting up. The consolidation or digestion of the move is in play and we will take all of that into consideration.

The February 25th low pivot point remains in play. The last three days have established a new potential pivot point on the downside to join the March 14th (Cypress and budget) high. Today’s move is testing the low from Monday and the trendline. This activity keeps the trend in a sideways trek, with a downward bias. 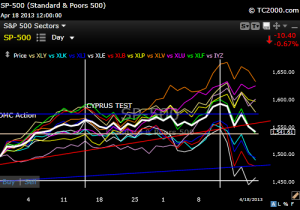 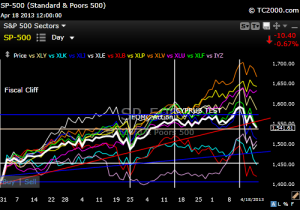 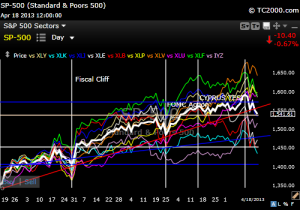 Short side of the market is building momentum and that leaves us empty on sectors to track short term. We own positions in the models and we continue to trad those, but we will this build in the coming days and weeks.

Treasury Bonds – Yields on the 30 year Treasury is back to 2.9% as the pressure on stocks fueled the rally in bonds. Economic data, some need for safety, you state the reason, but the great rotation from bonds has not occurred  At each sign of trouble money tends to flow back into the sector versus out. Expect more volatility in the price of the bonds a the worriers and the optimist duke it out. 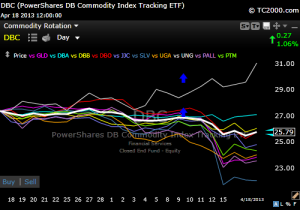 Global markets drop on slower economic data in China, Europe and the US. They tested lower on the news in Europe and China keep the markets in check. Monday reversed the upside momentum and now we have to watch how the downside unfolds short term. One day at a time.  The downside accelerated on Wednesday and that brings the sideways range back into play for now. 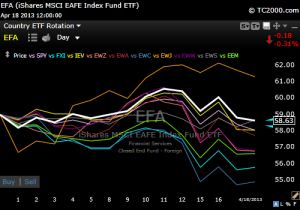 Real Estate Index (REITS) – IYR tested $70.73 support on Wednesday. Watch the top here to see if any opportunity develops in the REITs on the test lower. Be patient for now.