Welcome to earnings season! Alcoa cuts outlook for demand and Chevron warns of lower earnings, just the way you like for the reporting period to begin. Both stocks are Dow components and that sent the index down 129 points or 0.95% on the day. The S&P was off 0.6% and the NASDAQ down 0.4%. If this is how earnings will progress going forward the downside momentum could accelerate near term.

Oil fell 1% after  the big jump on Tuesday. The issues in the Middle East continue to heat up adding to the pressure on crude prices. Chevron’s news didn’t help the energy sector which fell 1.8%.

Treasury yields are on the decline again? The shift is lower as the news is full of reasons the economic picture is bad both short and longer term, and it is gaining traction. The fear factor kicks in and the money starts to move towards Treasury bonds again. Watching TLT and IEF here for indications of a transition. TLT is still in a downtrend off the July high, but watch to see how this anxiety plays out.

JP Morgan CEO stated today they did the Fed a favor when they bought Bear Sterns. I would have to say he has a point. The response is in relationship to the suit filed by the New York Attorney General. This is developing into a black cloud over the sector as the sides draw a line in the sand on right and wrong. Not good good for stocks.

Apple continues to garner headlines about earnings and the outlook for growth. The stock did manage to post a $5 gain on the day. On Tuesday the stock tested support at the $623 level. The stock will still determine the direction for the NASDASQ 100 index.

Overall it was a challenging day for the markets, but the damage was a test of near term support. There is still plenty of work to do and worries to conquer for investors and their confidence, not to mention more earnings reports tomorrow.

What am I watching for Wednesday?

Treasury Bonds – TLT bounced off support at the $120.75 mark. If the momentum builds we will look to add a position.

China gapped higher on the stimulus news. The bounce failed to hold up close basically flat on the day. FXP is the short China ETF and a break above $24.85 would be a positive short term for the directional play.

Retail – XRT – Lost 1.75% on the day and reversed the bounce off support near the $62 mark. Does the momentum remains weak short term. watching the downside risk.

Crude Oil – OIL – Stopped out of our short play — watch the volatility, do we sell lower tomorrow?

Energy – XLE – If crude drives higher what happens to stocks? Watch for the upside short term.

Apple – (AAPL) Can the stock hold support at the $623 level? If so, a bounce play may develop short term.

S&P 500 Sectors-to-Watch – The index picked up selling momentum on Tuesday and added to the downside today as the broad index decided to test the 1430 support. The attempted move higher has reversed course and is now at the critical support level of 1430. .

The Scatter Graph below is run from a starting point of the high on 9/13 following the FOMC meeting to provide stimulus and the markets rallied. As you can see we drifted lower from the high tested. Now it is testing lower again. The leaders have turned lower with healthcare, consumer staples and telecom shifting lower. Utilities, telecom and financials held up today, but the materials, industrials, energy and consumer services have sold lower as well. The new pivot point is the high on October 4th and we will look to see how that unfolds. So far technology has been the leader on the downside with the other nine sectors still holding above the index. Watch the current selling for clarity as we go forward. 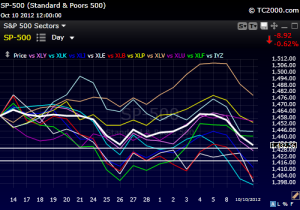 Financials – Bounced off support at $15.45 and moved higher. We held support and took the entry on the upside to lead the broad markets. Monitoring our stops we held support at $15.95 and we will watch how this holds up short term. The lawsuits from New York aren’t helping matter.  Focus, raise your stops and manage your risk.

Energy –  The sector was basically flat on Monday and Tuesday. It sold off today on the Chevron earnings announcement. That hit the stop on the play and we now watch and see how it plays from here.

Telecom – Added the play back on Friday as the sector remained in a positive uptrend. Some testing on Monday and some selling on Tuesday has put the negative sentiment in play in the sector. Watch and manage the stop.

Healthcare – The sector has pushed gradually higheir, but there is some more testing the move higher. Two days of back to back selling puts the index is a tough spot relative to support. Watching for $40.20 to hold short term. A look at IHI puts the downside risk into perspective. Manage your stops.

NASDAQ Index – The index has been under pressure from the large cap technology stocks selling. Apple is putting downside pressure on the index short term. Let the test play out and then look for entry point if the upside resumes. I added the short play on Tuesday as the index broke support and hit the trade entry.

Transportation Index – The transports bounced off support last week at the $86.75 mark on IYT. They were chugging along nicely until the selling on Tuesday impacted the outlook short term. We hit our stop on the EGG position on Monday and we continued lower. The indication for the economic picture aren’t good if the setor remains in downward trek.

Dollar – The dollar, like stocks, is being pushed up and down based on the daily sentiment towards Europe and the global economic picture. The downside pressure on the dollar has met support currently and any hope of the dollar rising is tied to Europe continue to provide a fear factor. We got the bounce off support and UUP is hitting against resistance at the $21.92 mark.

Treasury Bonds – The upside for the bonds are in focus as the markets reach a point of uncertainty. Looking for money to rotate back into bonds if the risk is rising. Hit the exit today on spike lower in yield. Watch TBT on the upside if the yields continue to decline.

4)  Commodities: Gold was holding near the highs, but the talk about selling is worthy watching short term. $170.25 is support for GLD and it tested it today.

WATCH: DBB – Tested lower again as the selling has accelerated. The gap lower at the open negated any short play. Base metals were lower and the Agriculture commodities moved lower as well on the day. Mixed bag for the sector overall. Watch and adjust your stops accordingly.

WATCH: OIL – up/down??? Watch to see if we gain any short term clarity.

5)  Global Markets: The global markets bounced last week off the low at $53 on EFA. Direction is still a big question short term as the ETF sold back to support on Tuesday and is now sitting on the 50 day moving average. Break of support brings the short trades into play.

WATHC: REM – Shift in sentiment within the sector over Hybrid Mortgage REITs versus Agency REITs. Thus weakness is hitting the latter like Annaly (NLY). Dividend is 10.2% currently for REM. Broke support at $15 on Tuesday watch as the downside is gaining momentum.