The indecision on Monday was Utilities and Energy stocks moving lower. Both sectors lacked confidence heading towards the start of earnings season tomorrow. Energy was the EGG play for today, but needless to say that didn’t break higher. Nothing really changed relative to the broad indexes or the outlook at this point, but the concern over earnings was expanded on in the media today. The cuts we discussed from last week started to hit home on how much the bar was lowered for the fourth quarter. I guess you can look at the lowered bar two ways. Good, as it will make the numbers look better or bad, in that this is the lowest growth for earnings since the recovery started in 2009.

The growth in earnings is now expected to be 2.8% for quarter over quarter. That is revised down from 9.9% at the beginning of the fourth quarter. A concern? Only time will tell, but it is not the direction you want the numbers going for investor sentiment. Financials will start the key data on Friday with Wells Fargo.

Earnings are not the only catalyst going forward, but forward guidance towards the new year or at least the first quarter will be watched closely. Many, me included, want to hear some optimism in the reports about growth. If that is missing it could turn into a longer than normal earnings period.

The Consumer Electronics Show started in Vegas this week and it had a positive influence on Intel and Qualcomm as they display their latest wares for the consumer. Watch technology overall in response to the meeting as it gives some insight into who and what may be the leader for the sector in 2013. In our weekend update technology was one of the sector to watch for upside.

Apple continued the test lower as we discussed. Watch the bounce opportunity off the $505 level.

Retail retreated 1%, but is still near the top end of the trading range on XRT.

Flat day overall as we head into the start of earnings tomorrow.

The index starts the week down 4 points to 1461. The test of the new high remains in play for the broad index. The drag on the index today came from energy and utilities. No major changes to the uptrend, but we have to manage the risk going forward.

The chart below has a starting point of 11/15 which was the pivot point for the uptrend. The first vertical line drawn on the chart shows the starting point of the drop relative to the fiscal cliff issues. The second is the rebound started last Monday. 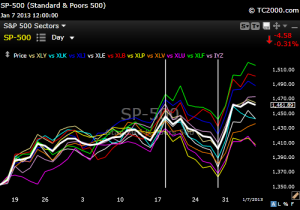 The chart below is the 28th of December starting point looking for current leadership on the renewed push higher. 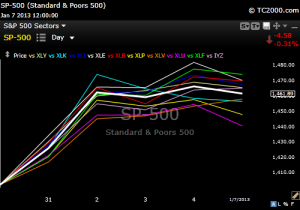 Energy, Financials, Materials and Industrials remain in the forefront of the market move. Utilities and Consumer Durable are the biggest laggards. This chart will give clues to the forward leadership, if the upside continues to develop.

The VIX index has accelerated lower on the positive sentiment. This is a positive sign short term for stocks, but the fear factor is not gone and forgotten, but simply put to rest for now.

NASDAQ Index – Stalled in a trading range of 3030 on the upside and 2960 on the downside. The index closed right on 2960 at the bottom of the current range and support on Friday. Bounced back close to 3019 last week and has continued to hand tough. Watch the large cap technology stocks for clues to the short term direction.

Dow Jones 30 Index – The support of 13,080 short term was broken and then came the bounce back above that level to 13,400. I am still looking for some signs of the upside continuing, but we will have to be patient for now.

Financials – XLF was one of the stronger sectors during the selling and has moved to a new high at $16.80. The gap open negated the ability to buy at $16.40 today. Testing the $17 level on the upside.

Basic Materials – XLB made a move back to the $36.80 support. The move to a new high was similar to the financials with a gap higher and close at the new high. This is another sector to like on the upside as we got a small test of the move on higher today. The earnings forecasts for the fourth quarter were cut by as much as 14%. The sector still rose 1.2% overall. Still moving up for now.

There is some topping patterns developing, but the optimism of the investors remains in play. Watch for a small test of the move short term as we

Dollar – The dollar was enjoying the upside as investors like the news in the Fed minutes Thursday. Some see the need for QE3 to end this year. Watching resistance near the $22 level on UUP. Needs to make a definitive move to the upside in order to play.

Euro – The euro is testing lower on the rally in the dollar on Thursday. The support at $129.80 is in play currently and break is the exit point for the play on the euro.

Treasury Bonds – The yield on the 10 year held at 1.9% and the 30 year to 3.1%. The downside risk in Treasury bonds is in play, but they are poised to bounce short term. TLT is is testing support at $118.40 and could provide a buying opportunity.

WATCH: EFA – Moved above $56.80 resistance and the uptrend short term continues. Stick with the uptrend play for now as it holds support.

WATCH: DXJ – Japan total dividend ETF broke higher, tested the support of the 200 day moving average and has moved higher. The break from the trading range was a positive trade entry at $33.25. Manage your risk and raise stop to $36.75. Falling yen is driving the stocks higher. Some topping in play – manage your risk.

WATCH: FXI – China has firmly established the uptrend off the November low. Clearing the $38.10 resistance on FXI was a plus as the upside continued. The economic challenges facing China moving forward are many, but investor are willing to look past that and believe in the trend. Cleared the resistance at $39.50 – 40.50 on the gap higher Wednesday.