Market starts lower then settles into a wait and see mode on the day. Question, is this the top for now? Do we start to see sellers step up the game on earnings? The charts are looking toppy and that is never a good sign when earnings are not in a position to impress. We have to be cautious short term as this all unfolds.

One indicator that is interesting currently is the percentage of stocks with high relative strength, and are trading above their 50 day moving average, currently stands at 97% of large and midcap stocks. That is a high number and is another indicator pointing to stocks being overbought short term. As we all know they can remain overbought longer than we think sometimes, but eventually they will adjust. Continue to take what the market gives, but protect against the downside risk.

Apple fell 3.5% to start the day as suppliers report lower orders on iPhones supplies. That was not what anyone in Apple stock wanted to hear prior to earnings. The stock still has downside pressure and our target remains $425 near term.

Banks were under pressure as well heading into the beginning of the announcements from the sector this week. The news from Wells Fargo showed reduced margins and that is still hanging over the sector.

As stated above we have to watch the downside risk and manage our positions short term.

The index made a solid move to 1472, but can’t seem to find any follow through on the move higher. Equally any test lower has not materialized either. Filtering through the sectors of the index we find Financials (XLF) cleared the $17 level on the upside to lead the sectors. Healthcare (XLV) broke to new high closing above the $41.60 level. Industrials (XLI) pushed back to a new high. Basic Materials (XLB) closed at a new high. Technology (XLK) held above support at the 200 day moving average. Bottom line… uptrend remains in play.

The chart below has a starting point of 11/15 which was the pivot point for the uptrend. Still moving sideways with an upside bias on the week and finding a catalyst on the upside is the goal. 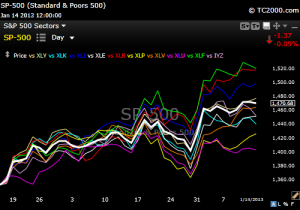 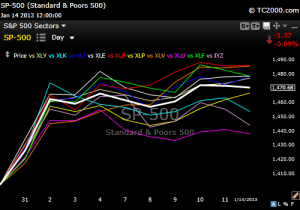 NASDAQ Index – The index cleared 3110 on the week and held. The test is holding above this level for now with the upside in play. Still potential for a test of the 3030 level.

Dow Jones 30 Index – 13,440 level on the upside was a positive. 13,200 support may come into play short term. Watch for confirmation of the move higher.

Financials – XLF fell slightly on Monday in preparation for earnings and in response to the Wells Fargo earnings. It remains above $16.80 as the first support level for now. One day at a time as we move into next weeks earnings on the financials. I would expect more selling short term if the focus on margins continue.

A test back towards $16.50 would give better entry point for a trading opportunity, but we have to go with the trend. Downgrade to BAC Wednesday put downside pressure on the banks as well. Watch to see how it plays out short term.

Wells Fargo posted revenue that topped expectations, but the profit margin fell (shock) disappointing investors and the stock dropped more than 2% at the open. Is this a sign of things to come from the sector? I wrote in the notes that the margin on revenue would be one of the key question marks. Now we have to protect against the downside if the trend continues next week. I would still take the selling as a opportunity to add to positions with a longer term focus.

Retail remains a mixed bag. XRT has pulled back after threatening to break from the trading range. Best Buy (BBY) jumped 12% onFriday as sales were reported flat versus down. That brought buyers to the stock? I am not one of them, and still don’t see the attraction to the stock. JC Penny’s (JCP) was downgraded to sell and the stock dropped more than 6%. Scanning the sector turned up some stocks worth watching. PSUN, WAG, CVS, URBN, SVU, TSCO, ANF.

Dollar – The dollar made a bounce off the lows as the Fed minutes gave reason to believe that QE funding would stop. Thursday and Friday the dollar retreated to support at $21.70 on UUP. The test lower today was a negative for the upside short term.

Euro – The euro was testing lower on the rally in the dollar, but that reversed on the dollar weakness and is now above the previous high at $132.82. Let this play out on the upside.

Treasury Bonds – The yield on the 10 year held at 1.85% and the 30 year to 3.04%. The downside risk in Treasury bonds was in play, but they are poised to bounce short term after holding $117.50 support on TLT. Still an upside opportunity in the bond short term. (SEE SECTOR WATCH LIST)

The commodity sector continues to be a challenge relative to direction short term. No real conviction and the choppy trading makes this more of a sector to avoid than own.

UNG – Natural Gas broke support and moved lower on January 2nd. On 1/10 the inventory data showed a drop in supply and the bottom was established. The good news finally pushed the price higher and it is now facing resistance again at the 200 and 50 day moving average? Winter demand remains mild which is why the downside had been in play. Still no clarity in direction, but I would watch the short side to set up for a trade. KOLD @ $26?

OIL – Oil has been stuck in trading range, but moved above the top end of the range at $93.50 last week. Still looking for clarity in trading relative to the price of crude. The upside is in play, and the breakout still needs to be confirmed on the upside.  The trade is there short term if you are willing to take the risk. ENTRY OIL is $21.70. (STOP $22) Willing to add to the position above $22.40? Watch.

UGA – Gasoline had moved back to the $59.40 level of resistance and has tested support near the $58.

GLD – Since September 2011 Gold has not eclipsed any of it’s previous highs. GLD resistance is at $175. We tested $159 on GLD and the metal cannot make up its mind short term. If we are to believe in the upside everyone is pontificating there has to be a break of the short term downtrend line before we are willing to be long. Be patient if you want to own gold.

DBB – Base Metals established support at $18.90, bounced and is back at that level again? No follow through on the upside for now. Hit our exit point and now we watch to see if the downside gains momentum.

Palladium (PALL) and Platinum (PPLT) remain the better bets on the precious metal side. Platinum broke higher on Monday? Watch for follow through on the upside.

WATCH: FXI – China has firmly established the uptrend off the November low. However, the volatility of the move has picked up on economic data from China. The Chinese exports rose 14.1% in December well above the 5% expected and sent the markets higher after a test lower on the week. Watch as a consolidation pattern is building on the chart.

WATCH: Emerging market bonds (EMB) – Looking for support and an entry opportunity from the selling.