The ADP report showed the private sector adding 281,000 jobs. That could be a disruptive number if the jobs report tomorrow is near the same range versus the 215,000 expected. Why? Simply put, the better the economy appears to be doing the greater the probability the Fed will be less accommodation on interest rates. If rates rise interest sensitive stocks will react. The last few days show that to be true as the yield on the long treasury bond have move up nearly 12 basis points and the Utilities have declined 2.6% in-kind. This is a key point to watch following the announcement this morning.

What has been the primary driver for the S&P 500 index to gain nearly 2% over the last month? Simply put, the belief in the Fed and their projected growth in the economy of 4% for the second quarter. Yellen has kicked the can down the road to the second half for that to take place, but that is the belief. The more staggering part is that investors are believing the fairy tale.  We will find out in the coming weeks if that actually on the way with the second quarter numbers. As we can see on the charts from Tuesday investors enter July optimistic. Sounds logical right. Well that is what they said and I believe every word! 😉 This is an economy that has been the most lethargic recovery ever in history, and following the 2008 correction fast periods of growth have been non-existent.

As you can see on the chart below of the S&P 500 index, trend gap (distance between the close on June 30th and the current trendline) is now 4.3%. When this gap widens the index is at risk of a test, pullback or correction, whichever term you would like to use. Thus, we have to be on watch going into the month of July for this to occur. I am not saying it will, just being prepared in the event it does. Should we continue higher, we are prepared for that as well. The best offense is a good defense. 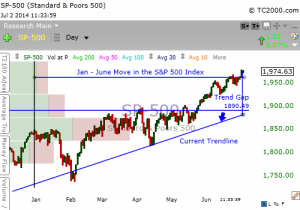