One headline last night read, “Headed for a stock market crash or mini correction?” While the fear implications of the headline are not what I like to see, the bigger question is how low does this market go before we find any kind of support? The lack of growth, the threat of taxes and European issues causing more riots are causing more concern. That has the market trading in line with a deflation type scenario currently versus inflationary. The global recession talk is rising to the surface again adding to the worry we may not see growth for a long time coming. In other words, we are hearing more of the same and noise level about a recession is back on the table. The one missing ingredient of establishing a bottom is panic. There isn’t massive headlines calling for a major correction and the VIX index remains somewhat calm.

The disturbance of the move lower has hit the fixed income sector squarely where it hurts, price. Scanning the sector has shown plenty of overall weakness resulting from the higher tax issue hanging overhead. I have to ask the question of whether that is really 100 percent of the impact or is it the overwhelming concern of credit spreads widening again? 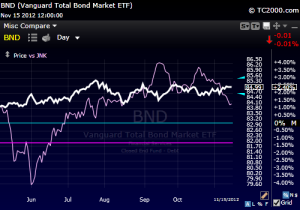 The chart above shows the comparison of the Vanguard Total Bond ETF (BND) and SPDR Barclays High Yield Bond ETF (JNK). You can see in the May timeline that high yield bonds fell versus the total bond fund. That resulted in a widening of the yields on the bonds or simply know as credit spread gap. As fear of credit risk rises junk bonds fall in value, thus raising the yield. In September prior to the QE3 action by the Fed we saw credit risk worries impacting junk bonds, but they reversed and move higher again into October. Since the peak on October 17th the widening of credit has been increasing. JNK broke below BND and is continuing lower a sign of a widening credit spread. We are watching this chart as an indicator for credit risk. The impact to fixed income investments has been on the downside.

MLPs (Master Limited Partnership) and REITs (Real Estate Investment Trust) have been reacting on the downside as well in the fixed income space. With most MLP assets based in the energy space, the downside advanced on lower oil prices and falling demand. However, now we have added the potential change in taxation of the assets and the drop lower has accelerated. These assets have moved onto our watch list as the values are becoming attractive again along with the dividend income. REITs are in the same boat, but they have struggled with the mortgage REITs leading on the downside. REM, iShares NAREIT Mortgage REITs ETF has dropped more than 16 percent since the high in late September. The Fed intervention in the space hasn’t helped, but there will be opportunities going forward. Another negative component of the fixed income space that is worthy of keeping on our watch list.

The technology sector is winning the race to the bottom as the index has effectively retraced 100 percent of the gains off the June lows. The move has been a big negative for the broad market indexes overall. The NASDAQ 100 index has struggled in relationship with Apple as it has accomplished the same feat of a moving back to the May lows. Not to be outdone Microsoft has closed below the June lows and is leading on the downside on the current move. As bad as the charts look and the downside trend is negative… the rally cries are being shouted. First task of importance… find support and hold for a tradable entry point. Our short play on the semiconductors and the sector overall have worked well, but now we have to manage the risk of the rally cry.

The key going forward is risk management. This means managing the downside turn as well as the reversal or a bounce off support. The risk level of the market remains elevated which translates into more short plays and higher cash positions. There will be plenty of opportunities when the dust settles to capitalize on the recent selling. Be patient and take it one day at a time.