The market starts lower on concerns about Russian rumors in Ukraine again. As the day progressed the worries subsided and the buyers were willing to gradually push the indexes back towards even on the day. Some key economic data today helped the buyers as GDP was revised higher to 4.2% growth in Q2 versus the downward revision expected. Despite the contrary reports that spending is slowing again in Q3 investors remain optimistic about the future outlook for economic growth. I am going to say nothing and look at the trendline of the major indexes and let them determine with the sentiment or belief in the future growth shifts. Investors tend to vote with their money and that ultimately determines the trend… up or down.

The VIX index did move the meter today on the initial selling and that could be a sign of things to come. We are heading into the Labor Day weekend and when we return we will be focused on the last big push towards the holiday season. September historically is an adjustment month and it has been negative more than positive. That is one reason to be cautious and another is the move off the August 7th low without any real test on the downside. Watching the VIX index doesn’t predict anything, but it does leave us with clues short term. A move back above 13 would be of interest relative to the current trend. The chart below shows the VIX index and the move lower on the rally of late. Bottom reversal in play and we will watch for a follow through on the move. 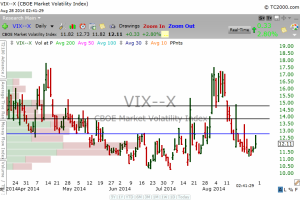 The other concern on the day is the yield on the thirty-year treasury bond. As you can see on the chart we gapped lower on the day and continue to see a rally in the bond on the other side. As we all know, when the yield falls the price of the bond rises. Thus, TLT, iShares 20+ Year Treasury Bond ETF moved above $119 intraday and is at a twelve month high. Why do I keep bring this up? Simply put… stocks are moving higher and bond yields are moving lower? Not historically how it works when the economy is growing. We can attempt to rationalize this away, but the facts are the facts. At some point order will have to be restored, but for now the trend in the bond off the January low has been higher. TLT has gained 17.5% plus the prorated share of the 4% dividend yield.

Tomorrow ends the week and the month of August for trading. That puts all the economic data front and center starting next week after the Monday Labor Day holiday. Expectations have not changed relative to growth being expected. The new home sales disappointed earlier in the week, but today the pending sales picked up to an eleven month high. We will see how that matches up withe ISM services and manufacturing data as well as the jobs report. For now don’t see much happening heading into the weekend and if the data is in line with expectations the upside may well resume its upward trek without any test. All we can do is take it one day at a time and manage our risk .