The economy may stink, but investors don’t seem to care. This is the weakest recovery since the great depression and Friday’s GDP report did nothing to change the course. As long as the Federal Reserve stays fully engaged in dumping money into the economy via ‘quantified easing’ at the rate of $85 billion per month investors have no worries. Markets rose 9% in the first quarter versus and economy growing at 2.5%? earnings reports for the first quarter have not been much better in terms of top line growth. In fact, revenue data has been poor across the board. Major industrial stocks have warned that things are not good around the world. China is slowing, Europe is bordering on a negative GDP, but investor keep buying and trading the market. Thus, the old adage of don’t fight the Fed, and don’t fight the tape.

The housing market is supposed to be the savior this time around. What happens to the growth in the housing sector if jobs don’t pick up? What happens if the economy remains sluggish? GDP data showed that personal savings have fallen to 2.6%… where will the money come from to fund future purchases. There is hope, rumors, speculation and belief that Congress will do something to reverse the sequestration (Budget Cuts) and tax hikes on the American Public. Based on the recent backpedaling on the FAA layoffs of air-traffic controllers, many expect that to become the norm from Congress as they continue to spend in the areas that scream the loudest.

The market has mastered shrugging off the data. At some point we all know it will end badly, but until then someone keeps buying and believing it will continue higher.

Personal income fell more than expected from March with a increase of 0.2% versus the 0.4% expected and 1.1% growth in February. Just another validation of the weakness. Consumer spending rose 0.2% with 0.1% expected. Pending home sales were up 1.5% and well ahead of expectations at 0.9%.  More sluggish news to start a week full of data.

We are testing the previous highs on the major indexes. My bias is to the downside, but that is why we watch the charts and go with the trend. The data continues to show weakness in the economy, but the buyers keep stepping in with the belief it will be better long term. That may very well be true and we will all see how it unfolds one day at a time. Today was another example hold your nose and jump in for many. Solid day with the primary exception of volume. Watch, hold, set stops and go to the next day.

The April 11th chart (bottom chart) below starts on the high as a potential pivot point lower, but has failed to accomplish any further downside after the April 18th low. In fact, we have now swung back to the highs of the April 11th pivot point. That brings in the question of a test of the move or a break higher? Utilities, telecom, consumer discretionary and consumer staples are the leaders over this period. Still looking for the key leadership of the move since April 18th (top chart). Basic materials, financials, energy, telecom and technology are providing the leadership from there. The two are different and that is where we have to understand the dynamics of the current trend an movement. 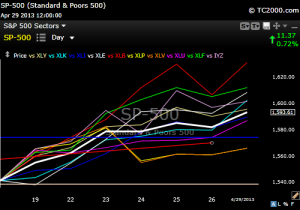 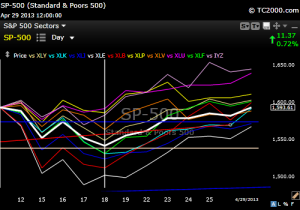 The February 25th low pivot point remains in play relative to the trend. However, the volatility of the sideways trading is making me crazy. The bounce in telecom, industrial, basic materials and energy changed the bottom side of the chart to be more positive overall. Uptrend still in play, but the continued test leave plenty to worry about. 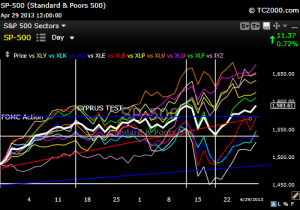 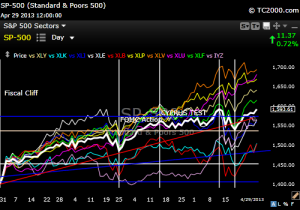 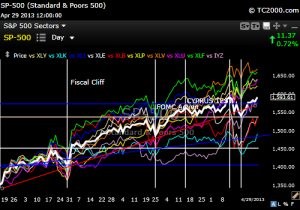 Technology (XLK) – Broke above the $30 level again. The key has been to buy the position as it moved and we have added to the S&P 500 as a trade. Solid leadership on the trading day for the sector.

Healthcare (XLV) – the biotech stall from earnings is weighing on the sector for now. $46.80 support is level I am watching now. protect the gains. Large cap biotech took a hit and slowed the progress. Watch to see if we can regain the upside momentum.

Industrial (XLI) – got a bounce from earnings this week and now at resistance near the $41.50 level. A break higher would be worth trading short term. Shift in commodities is the reason for the move. Watch the commodity emphasis on the sector. If fades pass, if it builds buy. Moved higher on the day and looks positive short term.

Energy (XLE) – testing the move and resistance. Watch for a move above $77.50 as possible buy point on the upside. Need crude to behave and the earnings to be positive in the sector. All positive for now, watching the downside risk.

Telecom (IYZ) – Moving higher, but test on Friday with an inside trading day. Still like the uptrend here and consolidating.

Since the high on March 27th the dollar has essentially moved sideways. The chart below shows no one currency is leading. Only FCY led to the downside, but is gaining of late. Nothing of interest now expect the British Pound (FXB) which bounced on economic data this week. 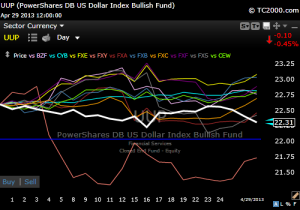 Treasury Bonds – Yields on the 30 year Treasury was flattening out, but jumped on Friday after the GDP data. Didn’t seem to bother investors in stocks, but rattled somebodies cage as money moved into bonds again. Watch to see how this unfolds next week.

High Yield Bonds – HYG = 6.5% yield. Support remains at $92.75. Move back towards the previous highs near the $95 level. Manage the position for the dividend as the growth side is uncertain short term. I expect the trading range to remain near term. Use $92.75 as the stop. The fund broke to a new high and uptrend remains in progress.

Municipal Bonds – MUB = 2.8% tax-free yield. Moving back in an uptrend ever so gradually. Collect your dividends and let it ride for now. 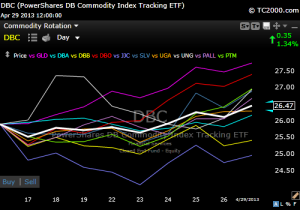 Global markets struggle with the slower economic data in China, Europe and the US. But, the EAFE index has started to bounce in response to the US markets this week and EFA hit the high from earlier in April today. The bounce is no indication of things improving, but trading in tandem with the US markets. 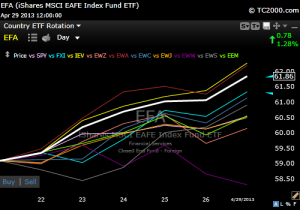