The broad indexes ended the day lower on downgrades to Asia and rumblings about no growth in Europe. The biggest struggle came from the technology sector losing 1.1% on the day. Apple was the biggest contributor down 2.3% and following through on the break of support on Friday. This could be the key story on the week if the downside continues in the stock. $635 is the next level of support and a key mark to watch as we move forward. We have earnings starting tomorrow and it now comes down to have investors will handle the low expectations from earning for third quarter. The expectations are for decline in earning for the third quarter which is the first decline in eleven quarters according to FactSet.

The volatility index has been sitting near the lows at 13.7, but the outlook is for the index to jump higher as earnings and forward guidance start to worry investors. If the volatility does pick up I would expect investors to head for the exits. The wall of worry has been building and if confidence is shaken the downside will gain momentum.

Gasoline prices were also a big headline item on the day as reports in California of $5 per gallon gasoline have some rattled about the impact to the consumer. The challenges between the refiners and the regulators get most of the blame as they have made the going tough to keep pace production wise. This will not likely spread to the rest of the country, but it is a disturbing trend nonetheless.

Overall it was a challenging day for the markets, but the damage was limited. There is still plenty of work to do and worries to conquer for investors and their confidence, not to mention we start earnings reports tomorrow.

What am I watching for Tuesday?

Selling in China today on the reports about Asia. FXP is the short China ETF and a break above $24.85 would be a positive short term for the directional play.

Retail – XRT – Hold above $63.50. There could be some backlash from all the talk about future profits being lowered due to the higher price of gasoline and other consumer durables. Watch for a upside play in the discount stocks in the sector. Scanning the stocks is worthwhile short term for the leaders.

Crude Oil – OIL – Hold support near the recent lows at $87.40. — Got the short play set up and took the play in DTO as we look for more downside in crude. $47 is the resistance as the shorts are playing out.

S&P 500 Sectors-to-Watch – The index has picked up directional volatility, Friday the index attempted to test the September high, but closed lower. Today we took the next step is testing the September 26th low. The good news is we remain above the 1430 support level for now. The wedge pattern consolidation was the pattern to watch and the index broke to the upside on the positive move last week in the index. If we test the previous support we have some more selling on the horizon.

The Scatter Graph below is run from a starting point of the high on 9/13 following the FOMC meeting to provide stimulus and the markets rallied. As you can see we drifted lower from the highs, but the ten sectors of the index have scattered. The leaders are the defensive sectors with Healthcare, Telecom, Consumer Staples and Consumer Services outperforming the index and the growth sectors are lagging.

The second graph shows the index sectors leadership following the 9/26 low and bounce since. The strength in the Financials has been the clear winner short term. However Healthcare, Consumer Staples, Utilities, Consumer Services and Industrial have added to the move higher. The outlook is still questionable, but the technical moves are worth trading short term. 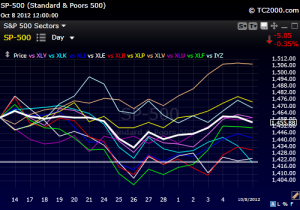 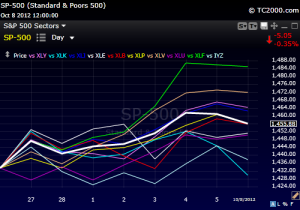 Financials – Bounced off support at $15.45 and moving higher again. We held support and took the entry on the upside to lead the broad markets. Monitor your stops closely. Nice move higher again today as the banks move. KBE broke above resistance as well and heading back towards the previous highs. The test on Monday is setting up a double top look short term. Manage the risk accordingly.

Energy –  The sector was basically flat on Monday. Watching the price of crude move lower is back in favor short term. Thus, we are still looking at how this is going to play out. Maintain your stops and let’s see what happens short term.

Telecom – Added the play back on Friday as the sector remains in a positive uptrend. Some testing on Monday with the negative sentiment picking up int the start of earings. Watch and manage the stop.

Healthcare – The sector continues to push gradually higheir, but is testing the move higher. IHF hit at new high last week and is providing some leadership for the sector. Pharma is still struggling and XPH is at key support near $59. Hold positions and manage the stops.

NASDAQ Index – The index has been under pressure from the large cap technology stocks selling. The bounce has followed through and set up a test of resistance. Apple is putting downside pressure on the index short term. Let the test play out and then look for entry point if the upside resumes.

Transportation Index – The transports are key indicator for the health of the economy. We are tracking this to see how it compares first, with how the market is doing relative to the sector. Second, to see if the sector is reflecting the economic data. IYT, iShares Transportation ETF is testing the key support level at $86.75 and this is the number to watch short term to confirm a move below support. Thus currently we see the index reflecting the economic data more than the market overall. Important to note the bounce this week on the positive economic data. Watch to see how this holds up this week.

Dollar – The dollar, like stocks, is being pushed up and down based on the daily sentiment towards Europe. The downside pressure on the dollar has met support currently and any hope of the dollar rising is tied to Europe continue to provide a fear factor. We got the bounce off support and UUP is hitting against resistance at the $21.92 mark. It reversed lower Wednesday on positive sentiment in Europe. This puts the short dollar play back on the table.

Treasury Bonds – TLT sold to $118.25 on the Feds stimulus announcement and we took the short term trade. We raised the stop last week and hit it today. We added the Watch on the short play if this broke lower. Hit the entry on the move lower in the bond Friday. Watch and manage your stop.

Question: Is there are bubble in the High Yield Bond Sector? HYG recently tumbled from $94 to support at $91.60. While the decline was only 2.5%, the show of volatility and risk relative to the price of these bonds was made abundantly clear. Is the party over in the sector or is this a buying opportunity? A break of the near term support would be a exit now and ask questions later event. We have bounced the last three days, but still a concern for the bond class. $91 Stop is good.

4)  Commodities: Gold s holding near the highs, but the talk about selling is worthy watching short term. The gold miners bounced back from the selling as well and remains in a consolidation pattern for now.

WATCH: DBB – Entry – $20.10 Tested lower again versus upside. The break is sitting on support at $19.45 for now. Watch the short play if this break support again.

WATCH: OIL – Broke below $90 again and we entered a short play with DTO.

5)  Global Markets: The global markets bounced last week off the low at $53 on EFA. Direction is still a big question short term. The reversal and break of the selling off the Septemer high was a positive for now on the long side with EFA?

WATCH: EFA – No follow through on the move higher Friday – Asia and Euorpe in the news.

WATHC: REM – Entry $15.20 – Shift in sentiment within the sector over Hybrid Mortgage REITs versus Agency REITs. Thus weakness is hitting the latter like Annaly (NLY). Dividend is 10.2% currently for REM.

WATCH: International Corporate Bonds (PICB) – hit breakout today from the consolidation at the $28.95 mark. Watch for test and entry near the $29 level.