On July 24th the S&P 500 index posted a new high at 1988. As you can see on the chart below that looked to be a breakout from the double bottom pattern built over the previous three weeks of trading. But, the next five days of trading as now produced a new low from the July 17th low. What does this mean for the broad index? In many ways it is too soon to tell, but it is not too soon to protect the downside risk it represents short term to our portfolio. Taking a longer term perspective will produce a different answer obviously, but either way we should be concerned about the near term direction of the index. The current trendline is near the 1900 level and would be a key level of support for the current trend. The move on Thursday also breaks the 50 DMA and puts pressure on the buyers to either step in or run for cover. If they run the downside acceleration will be of interest. Either way it is time to manage positions accordingly. 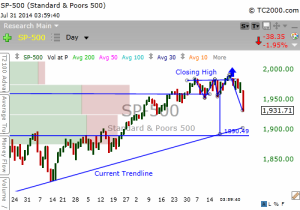 To add to the concern above take a look at the chart of the Russell 2000 Small Cap index. The trendline off the 2012 low was broken in March and we have developed a wide trading range that has diverged from the S&P 500 index above. This could be a sign of things to come for the overall markets, but that is speculation. Watch to see who this unfolds and hedge the downside risk going forward. 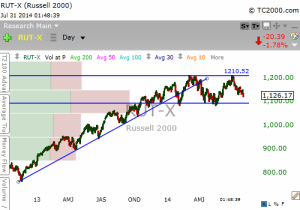 The next point of interest is Treasury bonds. The chart below of TLT, ishares 20+ Year Treasury Bond ETF show the rotation of money to safety since January. The move lower the last couple of trading days has been a result of rates moving higher. The economic picture has improved enough to put some pressure on the Fed to raise rates as we move into 2015. That in turn has put some pressure on stocks as investors are concerned about the ability of the recent growth to sustain itself moving forward. This is a case of be careful what you wish for… you may get it and then not like what it does. The downside in the Treasury bonds are flag of concern as well moving forward. 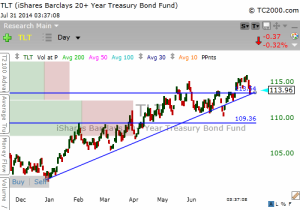 Last and certainly not least we have the high yield bond sector showing signs of selling. Historically we watch for this bond class to trade in unison with stocks. However, when yields start to rise or even the threat of yields rising these bonds tend to trade lower which is the same reaction you get from stocks. The chart below of HYG, iShares High Yield Bond ETF broke the uptrend line in June and accelerated lower the last two days in unison with stocks. The challenge for the broad indexes remains the mounting evidence that the sellers are gaining control short term. 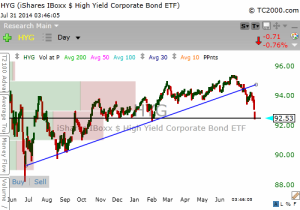 Volatility index (VIX) is showing signs of rising skepticism about direction as well. What was a quiet to complacent market has become one that is nervous about the future and all the moving parts. The spike to 16.8 today was a negative sign for short term sentiment as money headed for the exits. We would watch to see how this renewed volatility plays out, but the warning shots have been fired. 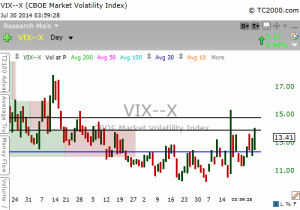 As you know, I don’t like speculation, but the cards are all starting to point towards some downside short term. The bigger question is will the buyers step in again on the dip lower. Tomorrow will be a day of interest as a follow through on the selling would mean more ahead and the 1900 level of support would likely be a target point to watch. If we bounce off this level of support near 1928 some buying maybe the short term result. Watch and act based on what the market tells you, but don’t speculate on what you believe will happen. We are still taking this one day at a time for now.