The market continues to rise despite the euro-zone worries, worse than expected jobs report and slowing growth in economic data. The push through the highs on the S&P 500 index and the NASDAQ have come with relative ease despite the data or beliefs relative to the economic picture. This validates that a bull market has the ability to overcome any psychological set backs if the belief or conviction is in play.

Most investors continue to live in denial of the recent climb higher. Precious few want to believe their is a future upside for the broad markets. Thus, the reason so many have been on the sidelines during the key stage of the move is disbelief simply put. Short interest has reached levels not seen since 2008. This is one of the more hated rallies I can remember. Thus we continue to look for the trend and respect the direction until which time it reverses.

The S&P 500 index has an cup and handle pattern since the high in March. The handle breaking higher is bullish based on the technical analysis of the pattern.  The upside follow through is set to move sequentially higher and the target is measured by the depth of the cup which from the June low to the March and August highs or approximately 1278-1418 or a target of 1558. If you step back to a weekly chart that lines up with the November 2007 high. Thus, based on the technical data the S&P 500 index is set to rise another 10% based on the current set up. 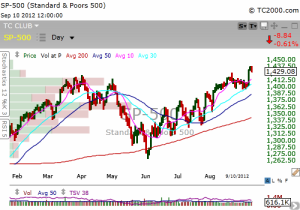 If we take a longer term view of this upside potential there will be some ups and downs as we move forward, but each will potentially offer opportunities not only in the broad market indexes, but the sectors that are providing the leadership short term. If we set the premise that the upside opportunity is in play going forward we will take a longer term view of each move up or down as a opportunity to manage and direct our portfolio accordingly, we will have greater confidence in our positions.

One sector we have continued to look at for leadership is financials. They have been volatile in the climb higher, but they remained in an uptrend and do offer some unique opportunities looking forward. The banks (KBE) have moved through the resistance at $22.75, but are meeting some short term resistance at $23.65 with a target of $24.45 currently. The brokers (IAI) have accelerated higher as well. Goldman Sachs (GS) has been the leader in the sector. We continue to invest and trade in the sector as the opportunities remain both short and long term on the upside. Any pullback or test of the recent move would be a good entry point.

The technology sector has been under pressure of late and it is worth watching for the resulting opportunities as the downside move plays out. Semiconductors (SOXX) are under pressure from Intel and warnings relative to the PC market. They withdrew forward guidance on Monday sending the sector down nearly 3% on the day. This drag on the overall technology sector is worthy of note. The storage disk space is moving lower on the Intel news and could be down as much as 3% today. Networking stocks fell 1.8% as well. The sector is under pressure as the reality of the PC space continues to adjust to the tablet market. Thus, there is opportunity around the sector and stocks near term. The key is to scan each of the sectors and find the value plays as this unfolds. The short plays are picking up and offers some trades, but on the other side will be opportunities in the oversold stocks that are fundamentally sound. Take the time to build your watch list of opportunities and track for the entry points.

Finding ideas that are working is the key to investing both short and long term. There is always a story unfolding in some sector or industry group. Find them, build the story, build your watch list of opportunities and track them to capitalize on the moves as they unfold. Sounds simple… it is if you have the discipline and a strategy to capitalize on the moves as they take place.

Fed meeting starts today. Germany’s court decides on the legality of ECB buying bonds. Apple announces the iPhone 5 schedule. It promises to be exciting yet again. Be patient and manage your risk.