The week starts off with some follow through selling, but ends the day with some buying. The challenge is confidence in earnings and growth looking forward. The broad indexes started where they left off on Friday. The key remains being a patient investor as the direction sorts itself out.

Looking at the ETF scans tonight there was movement in the precious meatals with both gold and silver making a solid move higher. They established support from the selling last week and now we watch for a follow though move tomorrow. The miners were higher as well with GDX, GDXJ and SIL posting solid gains on the day.

Global markets continue to show up in the scans as well. The selling on Friday was in sympathy with the US markets. China resumed its movement to the upside followin a break above resistance. Asia has benefitted from the optimism overall from China. Mexico, Indonesia, Netherlands and others continued the uptrend.

The dollar remains steady after bouncing off the recent lows. The move lower has subsided for the short term.

Bonds were flat on the day as well. Watching the downtrend in play on the bond as yields make an attempt to move higher.

Small caps remain a question mark as they closed slightly lower. 453 is the level to watch on the S&P 600 Small Cap Index.

It is definitely time to play defense and shift our mindset and outlook short term. When volatility rises the timeline of our holdings have to contract and we will be make those adjustments in our models and holding going forward.

NASDAQ 100 Index on the downside. The break lower is looking for support?

Semiconductors are still a big question mark for technology. The downside is still in play.

China continues to move higher as investors warm to the change in data. Buyers are putting money to work. FXI cleared $35.70 for entry on confirmation of the break higher. Pullback test was Friday and we bounced higher today. Still looking for the entry point for the fund.

KBE – watch the banks for a short term bounce?

Still scanning for the watch list, but unwilling to risk the exposure for now.

S&P 500 Index / Sectors-to-Watch – The index moved below the 1430 support intraday, but managed to close flat on the day as buyers stepped in late in the trading day. The chart of the index below shows the trading range we have been in for the last four weeks. The momentum shifted to the downside on Friday and we have to be watch next week to see how this plays out. The key is a shift in belief that has built over the last two weeks. The downside is gaining  traction as investor worry about the US economic picture worsening.. The chatter is growing and it has the making of a pullback or test of the long term uptrend. Watch 1430, then 1420 as support. 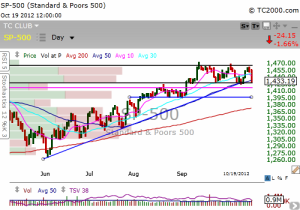 The Scatter Graph below is run from a starting point off the high on 9/14 following the FOMC meeting rally and the current high. It also reflects the trading range of the index during this period as well. The leadership has been Healthcare, Consumer Staples and Utilities. Not exactly the sector you want to see on top if the index is going to make a move higher. The most glaring shift in the chart has been in the technology sector at the bottom the last couple of trading days. The lack of growth in the economic picture is reflected in the leadership and the losers. 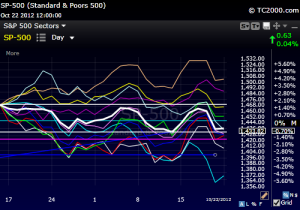 Financials – Tested the previous high at $16.40, but the selling is testing the move. Still in an uptrend, but watch how the week unfolds relative to selling. We have tightened the stop to protect the downside. The sector remains one of stronger fundamentally, but you never fight the tape. Remember, you can always buy positions back when the negative sentiment is done.

Energy – The sector made an additional move lower as crude continues to struggle relative to supply and demand. $72.50 is still the support level to watch. This has become a trading sector short term as the volatility has picked up. Watch how this unfolds on Monday.

WATCH: XLE – support holds we will add position back.

Telecom – Weakness in the big cap stocks continues to drag the sector lower. Despite the positive earnings the break of previous low and the 50 day moving average puts the downtrend in play again. We hit our stop at $25 and now watch to see how this plays out short term. VZ and T reversed in trading on Friday, but they are still worth watching going forward.

Healthcare – Back to the bottom end of the trading range in one day! That is not the action we were looking for from the sector. Time to be patient and let the noise settle for now.

NASDAQ Index – The index has been under pressure from the large cap technology stocks selling, and that expanded with Google and Microsoft earnings. The shift lower brought the QID trade back into the picture on Friday at break of $66.60 on QQQ. Apple bounce today helped the sector as well. Watch your stops and let this play out.

Transportation Index – The transports bounced off support last week at the $86.75 mark on IYT. They were chugging along nicely, but were hit by the negative sentiment on Friday. Hit the stop and closed near support at $90. Back to the drawing board as the sector remaining in a broad trading range.

Dollar – The dollar, like stocks, is being pushed up and down based on the daily sentiment towards Europe and the global economic picture. The downside pressure on the dollar abated as fear crept back into the markets. Watch the bounce in play on the buck.

Treasury Bonds – Bond outlook shifted to volatility along with stocks. Yields move above 3% on the thirty year bond only to move lower on Friday. The volatility isn’t worth trading at this point and we will watch for the next opportunity.

High Yield Bonds – We questioned the downside risk over the last month, but we have now bounced as risk trade is on again. Watching the upside test near the $93.90 level. The bonds reversed course with the selling on Friday. Watch the downside risk. As stocks go, so will the bonds.

4) Commodities: Tough sector to own currently with the rise in volatility across the sub-sectors. Watch for shift in direction short term. Mixed bag of volatility based on the data and speculation.

WATCH: DBB – Tested lower and the selling is back. No support yet — $18.20 – SLX jumped higher and cleared $46.50 resistance… reversed on Friday and could follow the overall sector lower. JJC broke lower from consolidation pattern and is going down. (BOM is short, but no volume)

WATCH: OIL – up/down??? Down is the current move in reaction to the economic and growth outlook. Friday’s negative impact from stocks shows in the chart. Watch the $87.50 level on crude as a short term target. DTO or other short oil plays picking up momentum. DTO cleared $45.60 entry point.

WATCH: UNG – Start the week down nearly 4% and volatility is alive and well. Trading sector for now.

5) Global Markets: The global markets bounced have bounced off the test last week, moved back towards the high in September, but now are testing in sympathy with the US markets. Watch and let this play out short term.

WATCH: EEM – Watch the upside breakout to follow through.

6) Real Estate (REITS) – The sector tested the recent high and support at $64 (IYR). Watch your downside risk if you still own this sector. We are looking for upside play if support holds, watch the $64.80 level for entry on upside. Broke higher Thursday and tested back on Friday – watch the downside risk of the Fed in the sector.

WATCH: REM – Shift in sentiment and broke support at $15 as the downside gained momentum. Watch a move above $14.50 as possible entry.

WATCH – NLY is acting the same short term as money rotates from the sector. Watch for support? $16.25 entry possible.

WATCH: PIMCO Global Advantage Strategy Bond (PAFCX) is hitting new highs and worth watching as a opportunity if we move above the $11.80 which it hit today for an entry. $11.81 Entry – Stop $11.74