Market complexity continues to muddy the waters for investors. Last week the news du jour was the Fed cutting stimulus and the emotional response pushing volatility higher. This week the Fed was out in force doing damage control and the markets rally back… and all is well. The answers are not as simple as the Fed and what actions they take or do not take currently. It is the reaction to the comments from the Fed that is pushing markets, not the actual action taking place. There is an extreme difference between the two. Thus, we have to step back, evaluate the reality from the reaction and make our decisions accordingly.

Interest rates have reacted equally to the Fed speculation as yields have risen significantly over the last month. Yields settled this week, but they did not retract from the emotional response.  The 30 year yield peaked at 3.61% and closed the week at 3.49%. That is well above the 2.84% from just four weeks ago. This remains an issue and one that is closely tied to the Fed activities and economic growth/stability

Throw in the issue facing the economy, US politics, geopolitical issues and global economic worries and you understand why volatility has picked up along with the lack of clarity looking forward. Until that clarity returns expect more of the same for the broad markets. Below we evaluate the impact and outlook for each asset class and how we want to find the opportunities for putting money to work next week.

The durable goods data was weaker than expected and Chicago PMI was well below expectation. First quarter GDP fell to 1.8%.  All adding up to negative data for the economic picture. ISM Manufacturing and Services reports are due this week and they will be watched closely for a rebound from the negative reports for May.

Jobless claims were the same as last week and holding steady for now. Personal income was better than expected rising 0.5%. Consumer spending was in line with expectations. This week we have the jobs report for June on Friday (155k new jobs expected in the report). Next week will shift the focus to the jobs data as another indicator for growth on the horizon.

There will be plenty of data to digest this week as June comes to a close and we get to see how the economy performed. If it misses the mark it will add a negative impact on the markets. The calendar link below will take you to the data expectations for next week.

The break of support bounced and moved back to resistance this week. The May 21st pivot point to the downside is still in play despite the bounce off the new lows. We move back within the target range of 1610-1630 we laid out in last weeks update, hitting intraday high of 1620 and closing at 1606. This brings up to the downside test we have discussed all week. Monday will give us some insight to investors sentiment as it is decision time relative to the downside plays. The move lower off the May 21st high is being tested with the bounce. If the major indexes find their way above key resistance and reestablish the uptrend then we will believe the downside acceleration is off and the sideways trading range is on. Thus, we will post both upside and downside play opportunities on the watch list.

Based on the bounce starting on Tuesday last week, Financials, Healthcare and Consumer Discretionary are the leaders on the upside. Also accelerating off the lows was Utilities and Telecom. The other five sectors tracked along with the broad index. The broad index was up 2.1% from Tuesday through Friday’s close. The laggards were positive, but failed to outperform the broad index itself.

Decision time for the broad index and the micro downtrend in play off the May 21st high. This week may set the tone, despite the fact it is a holiday week. 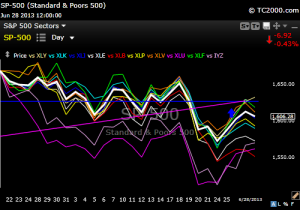 Downside Rotation: The downside reversed on the week and giving some hope to sector like Utilities, Telecom, Energy and Basic Materials. The remain in a short term downtrend, but the bounce allows for opportunities to add short plays if the bounce doesn’t hold or to add long positions if the upside find reason to trend higher.

Sideways Trend: The bounce on the week puts some of the sectors back in a sideways trend and offers some opportunity if they can find some optimism from investors. It will take time and patience remains the best course of action.

Upside Rotation: The is not upside movement at this point, but if we follow through on the  bounce off the current low watch for the leadership to come from those holding up the best (XLV, XLY) and the those with the biggest downside moves (XLU, XLK, IYZ). The latter being only a trade opportunity on the bounce.

As seen below the dollar moved lower from the previous high on May 17th high (pivot point).  Thanks to the FOMC meeting the dollar has regained the upside rotation and other currencies have moved lower. The question mark is will it last or is this just a reaction to the news. For now we  will approach it is a reaction to the news and a short term trading opportunity in the currencies relative t the news moving forward. 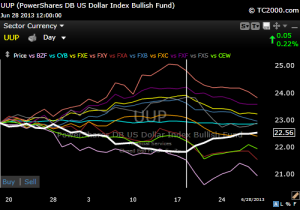 The bond market overall experienced a sell off that is a direct result of the yields rising quickly. There was some calming this week, but the concerns remain. I would expect this to calm even further on the week, but the question is more on the yields holding these levels or receding? You know the level will overshot on the upside initially and then settle into a reasonable zone for yields. Here is where the opportunity lies, if the yields move lower again.

Treasury Bonds – The yield on the 10 year bond is up 80 basis points over the last six weeks. At what point do these bonds become a buy? If you believe the economy is not strong enough for the Fed to withdraw the stimulus in place, bonds will snap back. However, if you believe the Fed will let rates rise as they cut stimulus, the downside may continue to be your play. I believe the opportunity lies somewhere in the middle. The Fed is likely to cut stimulus at least 20% or so initially to curb the amount of buying by the Fed. Thus far the the market believes the yields are high enough… but watch to see how this plays out moving forward.

Still moving sideways to down without any real leadership up or down. No interest in the asset class at this point. 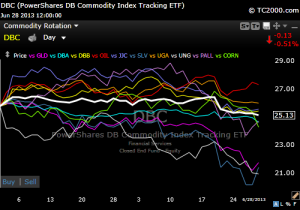 Global markets shifted to the downside and have not changed course yet. The May 21st pivot point lower has been more dramatic than the US markets, but the pivot correlates to the struggles facing the US markets relative to interest rates and the Fed as well as China, Japan, Europe and the Emerging Markets.

Japan (EWJ) has become volatile as a result of stimulus worries with the Bank of Japan. I still like the upside opportunity in the country, but you have to be willing to live with the volatility.  China (FXI) has struggled on the downside (down 14.6% since 5/21) with slowing economic growth that has disrupted investors. Europe (IEV) moved lower on concerns in Europe from China and the US markets.  Most bounced this week along with the US markets, but the downside trend remains in play short term.

The chart below shows the downtrend over the last week. 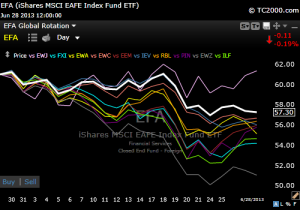