In the latest ‘cliff’ saga the President says no deal without taxes on the wealthy. He believes the proposal needs to add up? Since when does that matter? We have been running a spending deficit of more than 1.3 trillion dollars each year for the last four. I am not attempting to be political, but what about any of this makes any sense what-so-ever? Maybe the expiration of the Bush tax cuts, and all the other issues set to expire in December, would be better than the lack of action that is likely to take place in any compromise. Another day gone and nothing to discuss yet.

The index moved lower in early trading, but managed to work its way back to flat on the day. When it was all said and done the index closed at the same level we opened. The Scatter Graph below has a starting point of 11/15 which was the pivot point for the recent uptrend. As you can see at the end of the chart the sideways movement depicts the lack of interest from investors. We remain patient for now as this all unfolds.

The leadership for the move on the 15th low has come from Consumer Services, Consumer Durable, Industrials, Technology and recently Healthcare. Utilities made a move off the lows, but has returned to the downside the last couple of days. Now we are looking for some solution to the fiscal cliff and the economy to keep the upside trend alive. We need some clarity going forward, thus be patient for now and take what the market gives short term.

VIX index is rising and worth watching as the sideways movement looks for direction up or down? 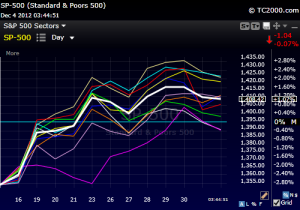 NASDAQ Index – Tested lower bounced to close above the 200 day moving average. The NASDAQ 100 index showed the same promise on the upside move. Took the entry on the QQQ move and the play is held in the Sector Rotator Model. Manage your risk.

Dow Jones 30 Index – The bounce back to the 200 day moving average is a positive, but now we need to make a move above this level short term. Patience with the entry as the index has struggled with volatility and consistency short term. The selling today wasn’t critical, but did get our attention

S&P 400 Midcap Index – The bounce off the low has now returned to the top end of the previous trading range. A break above the 1000 mark on the index would a positive and a opportunity to trade the sector. Be patient with the entry as this unfolds.

Dollar – The dollar sold lower and broke support at the $21.95 level on UUP. The dollar index (DXY) pulled back to support at 80 on Monday and broke lower today. The downside is firmly establish for now on the buck.

Euro – FXE is poised to move above the $129 mark and challenge the $130.60 mark. Got the follow through on the upside to confirm the downside play for the dollar Monday. This produced a short dollar and long euro trade opportunity for about 1.5% ROI short term. We are only short the dollar as a result of the gap higher on FXE.

Treasury Bonds – Reversal short term with yields up on the 10 year to 1.61% and the 30 year to 2.78%. Watch as the yields move lower and test support short term. The drop results in a push higher in the price of the bonds, and the upside trade with it. Stocks have floundered, but the bonds are reacting as if they sold off again.

WATCH: TLT – Gapped lower and then retraced it all. Wedge pattern setup. Watch for the directional break from the setup to give guidance on the trade. A break lower would set up the short play in TBT.

WATCH: SLV – Entry $31.50 (See ONLY ETF Model) Testing the upside move and . Holding near $33 resistance, but need some follow through or look to lock in gain and see how it plays out.

WATCH: FXI – China is testing the gap higher and watch for the $36.65 level to hold as possible entry play short term. The economic challenges facing China moving forward are many, but investor are willing to look past that and believe in the trend. The PMI data was positive on Monday, but the move was lower? Watch for trade on the break from the consolidation.

WATCH: TUR – 59.20 support held and solid bounce to maintain the uptrend. Look for trade entry on test of the move near the $62.40 mark for now. Monday and Tuesday produced the move higher and looks ready for a continued move short term.