No glitches in the economic reports today, but the $15 minimum wage law in Seattle raised a few eyebrows and dominated the headlines. The good news was US factory orders rose for the third straight month. This confirms the strength seen in the manufacturing sector the last two months. It was helped along by the strong auto sales numbers as well. Despite all that the markets never really got out of neutral today?

European Central Bank meets tomorrow and it is expected they will cut rates… that is in contrast to the Federal Reserve in the US cutting stimulus activity. How will the world markets respond if the ECB follows through? That is one item on my agenda to watch on Wednesday.

Short Treasury bonds (TBF), Semiconductors (SOXX), Silver, (SIL) China (FXI) and Natural Gas (FCG) stocks were the leaders on the day. Leadership from the technology sectors continues, China has been positive and broke through resistance setting the pace globally of late and natural gas commodity has been moving higher and that is pushing the stocks… at least today. Plenty of movement, but little in terms of conviction and trends short term.

I am traveling the next couple of days and will not post a recording per usual. The text and trading reports will be posted as usual. Thank you for your understanding.

The banks made solid move Monday despite the ISM manufacturing data and made a break through resistance on Tuesday to set the pace off the low and break the short term downtrend. Worth watching to see how the banks play out from here short term. The chart for the regional banks (KRE) looks similar, but the money center banks are showing more strength currently. 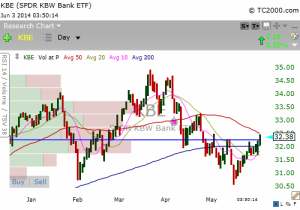 Treasury yields have been rising the last two days? Is this in response to the positive (better than expected) economic data of late? Or is there concern about the ECB cutting rates while the US market is looking raising rates? Worth our attention as money looks to be exiting the bonds. This may be fast money chasing the next big thing, thus be cautious in how you trade this going forward. Broke through the downtrend line in place from January? 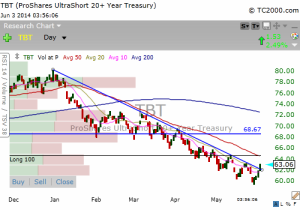 Plenty of consolidation and testing in sectors, but we have not seen any real attempt from the sellers to push this market lower. Still have to be cautious and let this play out for now.