Start the day with positive economic data. New home sales were much better than expected. That pushed the homebuilders (ITB) up more than 2%, but surrendered most of the gain in the afternoon sell-a-thon. Still like the sector looking forward and would the give back as an opportunity to track the position for a reasonable entry point.

The consumer sentiment was better than expected as well pushing the retail (XRT) stocks higher by 1%, but the failed to remain positive and closed lower by 0.6% on the day. Again, worth watching tomorrow to see how they play out.

Cause of the afternoon unrest? Selling… some wanted to blame Syria bombing areas in Iraq and other wanted to blame the worries about the global economy. Whatever reason we assign it was based on an event not a catalyst. Events tend to be temporary in impact and we have to watch to see how it all unfolds. Pay attention to the futures and overnight sentiment as we prepare for the trading day on Wednesday.

We remain in the business of managing portfolio and position risk while taking what the markets give.

The chart below is Energy (XLE). As we stated above it posted the first really negative in a string of positives for the last six weeks. This is just a news reaction or something bigger. We have to watch how this unfolds. Support is at $95.08 and that is a far way from the highs on Monday. Watch manage the risk and then look for the opportunity that results from the outcome. 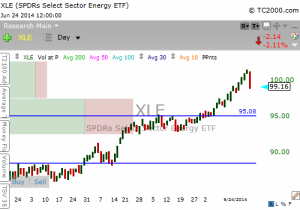 Still plenty of work to do and downside risk to manage. We were letting the upside run and expecting sum of the parts to lead the whole. Tuesday put a new twist on the tale and we have to see how this unfolds going forward. We will remain patient and let this unfold as we take it one day at a time.