What are the tea leaves saying about the open today? China and Europe are leading the indexes higher according to the futures. What does that have to do with the US markets? Enough to distract the uncertainty of the FOMC minutes released on Wednesday afternoon that took the indexes on a magic carpet ride. China’s manufacturing data rose unexpectedly? Amazing how that happens, just when you thought there economy was weakening again. Europe showed business activity expanded faster in August than anytime in the last two years. Both were positive and sent the respective countries higher. Thus, that is good news for the US since we cannot determine what the Fed is going to do with stimulus! Remember… “dumb money believes what it reads or hears.” I am not saying that either country is lying, I am more concern about the ignorance of the Fed and what action they will take in the coming months. Still cautious going forward and willing to be patient versus assumptive.

One sector-to-watch today is retail. The earnings from the sector overall have been very hit and miss. Abercrombie (ANF) is down 19% in the pre-market trading on missed… or should we say, not even close, earnings announcement. The interesting stat is the number of insiders that have been selling over the last quarter. I am sure they didn’t know anything. XRT, SPDR Retail ETF broke below the 50 day moving average on Wednesday and the earnings news is set to send the sector down to support at $77.20. A break from there would open the way to $74. Downside is in play as the consumer stalls on spending. This should not be a big surprise in light of the stagnate wages and most new jobs being added are part-time and much lower wages. I will say it as simply as I know how… regulations enacted on corporations lead to a slowing in hiring and expansion. Say what you may about the new healthcare laws, banking regulations, Wall Street regulations, home lending, etc. etc. etc. and you stall the growth side of companies. Worse yet, they will find a way around it like water flowing down hill. I am not saying it is right, just making and economic observation of how things work in the real world of business. The short side of retail is starting to look more attractive short term based on the company warnings issues and the pullback in the consumer.

Speaking of employment challenges Wells Fargo joined Cisco is laying off employees… surprise. (see above) To make the point further, UPS discontinued coverage for spouses on healthcare to the tune of 15,000 at a savings of $60 million. The jobless claims rose 10k today to 330k for the week. I expect this number will rise slowly heading into the year end.

Chart of the Day… TLT is the 20+ Year Treasury Bond ETF from iShares and you can see the accelerated downtrend of the bond since the early May timeline. The continued move higher in rates has impact the bond on the downside and with the Fed stating they are going to cut stimulus it has allowed the rates to move up even faster. The question is where or at what level do yield rise to keep investors interested versus the risk of ownership. Our target has been 4.25% on the bond and we closed at 3.85% on Wednesday. That would be mean more downside in the bond to come. TBF is one way to hedge your position in the bond, but not owning is the best way to proceed until the yield flattens out and the downside risk subsides. 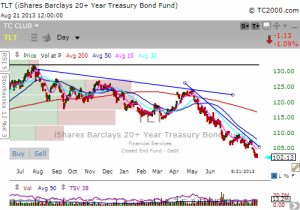 Let the market open and see how this plays out today. This is part of the bounce we discussed following the technically oversold conditions in the indexes. I doubt the selling is over based on what we are seeing both technically and fundamentally in stocks.