Everything is okay again? One day of selling, if you could call Wednesday selling, and back to the buyers we go. I am still tracking the Wall of Worry we discussed yesterday and will going forward. They will all take time to unfold or be discredited and in the meantime we will go with the trend of the markets which remains up.

Gold continued to trek higher hitting $1346 on the day and closing at the 50 DMA. A move back near $1420 level is not out of the question on the current rally. GDX has been equally positive on the upside in response to the move in gold.

The dollar held near the 79 mark on the dollar index. UUP hit a new 52 week low and remains negative short term. The euro hit a new 52 week high and the upside is firmly in play. Bond yields on the ten year bond rose three basis points to 2.52%, but well off the highs as 2.95% in September.

Carl Icahn loves using the media to push stocks and CEOs around. Beating his chest over the Netflix sell and then publishing a letter to Tim Cook (Apple CEO) to institute a stock buyback program. Maybe we should start writing and talking about stocks we own to get them to go higher? Not worth it, I still need to sleep at night. Interesting to watch as the likes of Bill Gross state their concerns.

Risk continues to be elevated from my view. Doesn’t preclude me from following the trend or trading stocks, it simply keeps the stops tight and the focus sharp on what is taking place each day in the overall markets. This is still about earnings and the economic outlook near term. Amazon and Microsoft both report after-hours tonight and there will be plenty of attention paid to the trends.

The S&P 500 index moved back near the highs on Thursday at 1752 on the close.  The near term target remains at 1800 on the index and support is 1730 and 1690. I like the upside going forward as the buyers remain in control relative to sentiment and momentum. Earnings and economic data remain the key short term for the index. The downside risk is a possibility near term and that keeps us focused.

The NASDAQ hit a new high again at 3929 on Tuesday. The brief stumble on Wednesday, was turned around today. Earnings continue to move the market along with the economic data. Positive data today helped spark the move higher from the open. Nothing spectacular, but enough to keep the sellers at bay for now.

The Dow remains the laggard, but led the broad indexes today. The upside gain of .6% was a positive today closing at 15,506 and in position to retest the September high. Not a fan of the index as earnings remain mixed bag for the sector. I am willing to wait and see before committing any capital to the index.

The Small Cap stocks continue to provide solid leadership much like the NASDAQ. They did test slightly and we are looking to see how it plays out moving forward. IWM hitting near the previous high on the day.

The chart today goes to Gold Miners (GDX) with the positive reversal off the lows two weeks ago. This puts the miners in play relative to the bounce in gold. As you can see on the chart below the move today back near the 50 DMA is a positive and we broke the down trendline from the August high. The near term target of $28.50 is realistic. I am not a big advocate of gold longer term, but technically the set for the trade was sound and the follow through has presented a nice opportunity in the ETF. 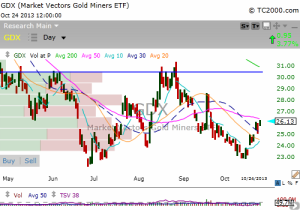 Apple was our stock of the day earlier this week and it was following through on the positive momentum heading into the release of the new iPads. It moved to $532 on Thursday as follow through to the program selling on Tuesday. Good sentiment and positive trend are in play. The upside still remain favorable, but a little less volatility would be nice.

Netflix (NFLX) – Tested to support at 318 and bounced to close at $336. The selling on Tuesday is still being talked about among the investment community. The buying is being tested at the $336 resistance level and if this fails look for a test back to the 50 DMA. Bottom line… more sideways trading until the news sorts itself out.

Home Construction (ITB) – solid follow through up 2.8% as the sector continues to benefit from the interest rate declines. 30 year mortgage rates are lowest in several months and the new homes sales were delayed until 11/4? Interesting, but didn’t hurt the sector move off the lows.

What to Watch Tomorrow:
Earnings, end of the week, economic news, and response to Amazon (beat estimates) and Microsoft (beat earnings) will be our focus on the morning and how traders respond the balance of the day. We are still likely to see more selling at some point moving forward. Wednesday’s move was a taste. Set your stops and trade your plan. There is a long way to go and plenty of argument left to take place relative to “overbought or oversold”.