The broad indexes spent most of the day treading water. When you scan the results you find a mess of confusion from my perspective. The S&P 500 index is working towards the 1405 support level closing at 1413, the NASDAQ is being held captive to Apple’s selling closing at 2971 and closing back below the 200 day moving average, and the Dow is at 13,135 with 13,080 the level to watch.

There was no one sector to point to and say that is the reason. There was no real fear on Friday. Just an old fashion topping in the market. Some say a reverse head-and-shoulder pattern is setting up and the market will break higher to end the year off this move. I am not in that camp based on the last three days of activity.

The economic data was tolerable on the week. No big disappointments and some minor positives to take away. Fundamentally nothing has really changed. The news is still focused on the “fiscal cliff” issues facing those in Washington and eventually the half of the population that pays taxes. The VIX index move back to the top of the current range and is in a position to move higher. Which would translate into the market moving lower.

China is benefiting from the hope or belief their economy is improving. I say trade the move higher and get out as the data doesn’t support the belief. FXI gained 1.7% on the day as a result of some positive economic data released overnight. Again it is a trade nothing more at this point.

Bottom line… another week in the book and there is still a lack of clarity going forward. For that reason we remain in trading mode. Unless there is a logical and definable shift in the fundamental data we will continue to trade what the market gives and stay out of the way of falling rocks.

The index moved to the top side of the resistance range at 1428 on Tuesday. Moved higher on the Fed announcement on Wednesday. Similar to the QE3 announcement, didn’t hold the gains into the close.  The focus is to break through the 1430 resistance which was accomplished intraday, but not on the close.  The concern relative to this week, was the reversal on the break through resistance. Since that point the index has continued to sell lower. For now we stick with the trend and see how it plays out next week.

The Scatter Graph below has a starting point of 11/15 which was the pivot point for the recent uptrend. The correlation between the sectors remains high with continued juggling of the leadership. You can see Thursday and Friday impact at the end of the chart with the turn lower. The drop has been minimal, but the psyche is at full alert. December 12th marks the next potential pivot point on the downside. We will watch any developments into next week.

The uptrend remains in play for now, but we have to pay attention to the downside in energy, technology, healthcare and consumer discretionary. They have led on the downside the last two days, but there is no over powering indication the selling will continue. We have to be patient and disciplined as we see how it unfolds. 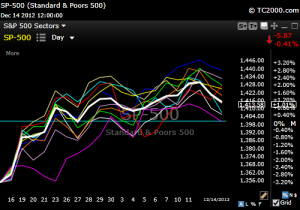 The VIX index is rising thanks to the renewed concerns of the fiscal budget. A move above 17.50 would signal a negative warning for the index and the broad markets short term.

NASDAQ Index – Failed to hold above the 3000 level and sold further on Friday. We can contribute most of the issues to Apple and other large cap stocks that sold of Friday, but this is worthy of our attention short term. The NASDAQ 100 index was off 1% on Friday versus 0.7% for the broader index. That is the large cap collapse I am calling it for now. We are on heightened alert for the index.

S&P 400 Midcap Index – The bounce off the low has now returned to the top end of the previous trading range. The break above the 1000 mark on the index was a positive and a opportunity to trade the sector. However, we are now testing the move and need to maintain our stops on positions in the event the downside accelerates. Watch and manage the risk.

S&P 600 Small Cap Index – Stalled near resistance at the $77.60 level on IJR. Still looking for a break from the consolidation to the upside short term. The retest of the break higher is in play currently and we will watch to see how this unfolds. The intraday reversal on Wednesday was negative and the test of $75.60 could be the result. There is cause for concern on the move and we will have to watch how this plays out on Friday.

Telecom – IYZ broke through the short term resistance $23.90. CCI, LVLT and LUK have been leaders on the move off the low November 15th. The Apple effect is creeping into the telecom sector as well. QCOM and others dropped more than 3% on Friday in response to decrease in orders. Watch the downside here and manage the stop.

Financials – XLF made solid move higher, but failed to hold the all the gains. The upside remains in play as we attempt to move above the September high. Banks attempted to continue the leadership, but fizzled in the end. The upside leadership is coming into question and thus, we have to watch the broad sector for a near term top.

Basic Materials – XLB made a big move at the open on Friday. The steel stocks are the driver for the index currently. PPG (chemicals) was up more than 4% at the open as well. SLX gained 1.4% at the open to lead the overall sector higher. A move above $36.80 would the pivot point to watch currently on XLB.

Dollar – Attempting to create a low again. Still not interested in the dollar, but is does give insight in the global markets.

Euro – The euro breaking out above the $130 mark on FXE. May be the beginning of a run higher in the euro.

Yen – FXY tested support again at $119 and bounced two days and reversed to $119 again. We will watch to see how support holds? Broke support in two days has moved near the $117.25 support level now. Good for the Japanese stocks (EWJ, DXJ)

Treasury Bonds – The yield on the 10 year rose to 1.70% and the 30 year to 2.87% on Friday. TLT tested support at the 200 day moving average. The move lower pushed TLT lower from the consolidation wedge and triggered the trade opportunity on the short side. We added to the ONLY ETF Model Wednesday. Watch and manage the short term risk as we know all too well on these bonds.

High Yield Bonds – Big bounce on stocks moving higher with stocks. Hitting resistance at the 93.80 level. Watch for a follow through move higher if stocks continue to rally. Tested support on Friday.

KOLD _ Natural Gas broke support and continues to move lower. The short trade was up 1.4% today.

OIL – Oil is stuck in trading range too narrow to even trade short term. Patience as a play develops.

DBB – Base Metals are testing resistance at $19.40 on the upside and if we find the catalyst to move through that level would be short term trade opportunity.

The NASDAQ Global Market Index (NQGM) struggling to get above the 200 day moving average. The consolidation near the high is worth watch for a direction indication short term.

WATCH: EFA – Broke above the high at $55.20 and in position to continue the uptrend short term. Be patient and see how it play to start the week. ONLY ETF Model.

WATCH: DXJ – Japan total dividend ETF broke higher, tested the support of the 200 day moving average and has moved higher. The break from the trading range is a positive with a trade entry at $33.25. Manage your risk and raise stop to $33.70. Falling yen is driving the stocks higher.

WATCH: FXI – China gapped higher followed through on the upside. Clearing the $38.10 resistance on FXI is testing the gap higher and watch for the $36.65 level to hold as possible entry play short term. The economic challenges facing China moving forward are many, but investor are willing to look past that and believe in the trend. Gap higher on Monday as money rotates into the ETF.

WATCH: IEV – Europe continues to rally despite all the negative economic reports and sovereign debt issues looming. Why? Simply put the backing of the EU and the ECB (similar to the Fed in the US in 2009). The confidence that there is a back stop has brought investors back to the table. Looking at the daily chart for the last year we can see the break above resistance recently and putting a target of $45.60 on IEV.

The sector broke support tested lower and then reversed along with the broad indexes. The fear generated by the fiscal cliff issues sent the sector lower. The reversal is worth trading if the cliff issues remain at bay short term. Tested back today on broad market reactions to the cliff.

WATCH: PAFCX – bounced off support near the $11.66 mark. Held the uptrend line and support. HOLD. Watch the selling on Thursday’s impact to the trend.