All is well… everyone has thought about the bubble talk from Ms. Yellen and decided she isn’t going to act even if she believes it is true. Despite the talk about sector valuations being high in biotech and social media, she references employment as the catalyst for the Fed to act earlier in raising rates. Please note that has nothing to do with the valuation of stocks. She knows that the price of oranges are too high, but she doesn’t want to do anything that may disrupt what happens with bananas. If we could all be so lucky as to use this rationale in managing our lives it would be wonderful.

Anyway, back to the real world for a moment, technology stocks moved higher by 1.1% on the positive earnings from Intel. The stock gained more than 7% on the day and the semiconductors as a sector were up 1%. In contrast, the social media (SOCL) stocks were down 0.4% and biotech (IBB) was down 1.4%, that is the power of the Fed’s comments. For now the words have sent investors to look at sectors not mentioned in Yellen’s comments relative to valuation. This may present an opportunity in the both IBB and SOCL going forward because we all know she isn’t going to act unless the P/E ratio of the S&P 500 index spikes near the 30 level. Since it currently resides near 18 there is plenty of room for the Fed to procrastinate any “sudden” changes in rates. If you don’t believe it… look at the yield on the ten and thirty year bond… they both moved lower today.

The retail sector continued to struggle following the weaker sales data for June. XRT tested support near the $84.50 mark and held today, but we are still concerned about the downside risk in the category relative to growth in the economy and consumer spending. There is plenty of banter in the media relative to this topic, but it still comes down to the facts not the speculation. Sales are not growing. That aside this remains a stock picking sector.

On the economic front the Fed’s Beige Book was released today and it shows improved labor markets across the country. Not surprisingly the data fell in line with what the Fed has been pontificating the last 3-6 months. No surprises is good news to investors.

Industrial production was just below expectation at 0.2% growth, capacity utilization was unchanged at 79.1% and the producer price index (PPI) was up 0.4% and showing more inflation at the wholesale level. Oil prices are having an impact and could cause more inflation at the consumer level looking forward. More worries for investors to add to the growing list.

Earnings were the other catalyst on the day with Intel beating expectations and leading the upside. Yahoo and Bank of America however, didn’t fare quite as well missing and tumbling lower. Tech, as stated above, did just fine on the day, but banks (KBE) fell 1.6% in response to BAC.

BRICS leaders announced the launch of a $100 billion development bank and a currency reserve pool on Tuesday. This is the first step toward what many call “reshaping the Western-dominated” international financial system. How this unfolds will be of interest to the world economies in time. For now it is an effort to give the emerging markets more say in global finances. The biggest concern is China’s desire to be a larger shareholder and decision maker in the bank.

It remains a data driven market currently with earnings and economic news driving the activity. Stick with the trend, manage your stops and let it play out one day at a time.

The energy sector responded to the EIA supply data on crude oil today. The inventory draw down was bigger than expected and investors push crude price back above $101 on the close up 1.4% for the day. As crude sentiment goes, so goes the sector prices and XLE gained 1.5% today. The chart below shows the bounce off support and the move back to resistance at the $100.50 level. The sector remain in an uptrend with consolidation near the high. Watch for continuation of the trend if oil prices hold on the move higher. 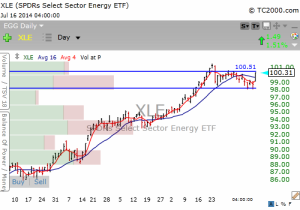