Positive bounce gives up most of the gains by end of the day. What started to look like an intraday reversal turned out to be nothing more than a bounce met by more selling to end the day. The day started with what everyone wanted to call the Yellen bounce, as the White House nominated Janet Yellen for the new Federal Reserve Chairwoman. The rally was on the belief she would continue the free money stance of Ben Bernanke. However, the FOMC minutes today showed that most Fed Presidents wanted to start the stimulus cuts prior to year end. With the current fights over the budget and debt ceiling I am not sure that will still be the case going forward.

Today there are rumors of, dare I say… ‘negotiations’, taking place behind the scenes for a short term lift of the debt ceiling in exchange for some longer term conversations on the budget. We don’t want anyone to think they are actually working towards a solution so please understand this is just a rumor.

The major indexes broke support levels on Monday and put the downside in play. The pressure is still coming from an outside event, the budget and debt ceiling. Thus, news remains in control along with speculation. As I stated again and again, the longer this game is played the more likely the downtrend will remain longer therm, regardless of what actions they (Congress) eventually take.

Starting with the weakest index, the Dow, moved 130 point intraday and closed up 26 point when the day was over. The index broke support at 15,100 and the uptrend line in place from November of last year. The break puts the trendline in jeopardy and the downside gaining control. Since we failed to accelerate today we hold our position in the DXD trade which has played out nicely in our models. The bounce puts us on notice for a potential upside bounce short term and something to watch. Look for DIA to move above $148.34 and adjust your stops on DXD accordingly.

The NASDAQ continued to play catch-up on the downside today breaking below the 50 DMA. Moves from GMCR, FAST, SHLD, TSLA and NFLX all helped keep the index in negative territory on the day. 3115 support is in play and we will be watching to see if it holds tomorrow.

The S&P 500 index broke  the next key support level at 1670 and is attempting to hold the 1657 support. The move also put the index below the uptrend line off the November low and is putting the intermediate term trend in jeopardy of being broken on the downside. Remember we are being driven lower by a outside event and that keeps me more guarded about the short trades relative to stop placement.

The VIX index was higher early, but moved lower on the day. I would look for a move back near the 17.7 mark short term.

Looking at our sector rotation chart below with the September 18th pivot point, the sectors show some sideways movement from the aggressive selling on Monday. It remains ugly, but looking for some leadership if this is going to turn back to the upside anytime soon. Technology, Utilities, Telecom and Financials offered some positive moves, but we will have to watch to see if any of this plays out on the upside or if the downside continues to drive the index lower. 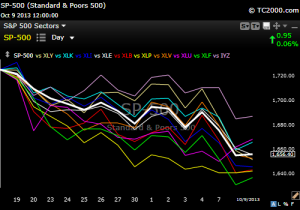 Chart of the Day: NetFlix (NFLX)

The drop of 12.8% the last five trading days shows what happens when markets turn against high flying stocks. This is not the only large cap stock to be treated this way over the last week, but it is one that set up for short on the move below the $317 mark. It isn’t easy to bet against a stock with this type of momentum, but it is easy to put stops in place to protect you from the downside acceleration taking all the gains out of your positions. Manage your money is the point. NFLX closed on the 50 DMA and in position to find support near term. Once it establishes support this could be a opportunity worthy of playing. 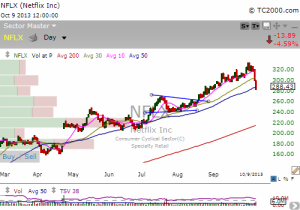 Tomorrow is another day and one to watch as it concerns a potential deal brewing on the debt ceiling and that would certainly provide some upside to the broad indexes. Earnings start to roll with plenty of news to review. Watch for the morning notes to give you some guidance as to what is working and what may offer opportunities as we begin the day of trading.

Sorry for the delay in getting these notes out tonight… had some issues to attend to that couldn’t wait! See in the AM.