A day of digestion? Only time will tell, but the move lower in the yield on treasury bonds is one big note on the day. The drop in crude oil and gold prices are intriguing as well. In fact, the drop in commodities would signal agreement with the drop in gold prices. The one worrisome component is the drop in yields? Signalling something and it continues to keep everyone aware of what could be on the horizon. For now we keep rowing our boat, maintaining our discipline with one eye on the exits, and one on the opportunities. Not an easy market environment, but one that keeps us awake.

The chart below of China (FXI) show the attempted reversal in the downtrend, but it has met with plenty of resistance along the way. A move above the 200 day moving average and the $36.60 resistance could offer a move to the downtrend line at $38.50. Not convinced the momentum is there to go much higher, but the upside trade could well be worthy of our attention as an opportunity. 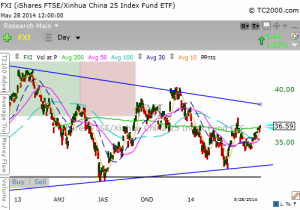 Gold falling and may fall further according to analyst and pundits. The move towards $1250 support has the attention on the investment community. The continuation of the current downtrend could retest the $1190 level low from January and last July. What is the problem? Nothing driving price. Demand is flat at best and speculation is at a low, thus it is testing lower. Watch to see if it can hold the next level of support at $1255 mark. GLL is short gold ETF. 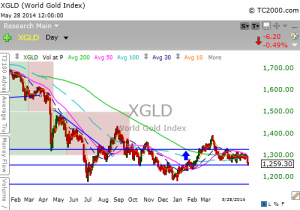 The charts below are from Tuesday and still watching to see how they unfold….

The SOX index broke above the downtrend line currently in play and cleared 585 resistance. That is all positive for the sector to resume the longer term uptrend. The entry point was hit to add positions in the corresponding ETFs that track the index on Friday. The follow through today confirms the push higher in momentum for the technology sector and semiconductors. 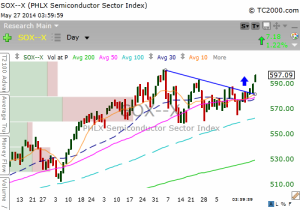 The Russell 2000 small cap index is what we looked all last week to show the current crazy activity of the markets at work. Thursday the index followed through and cleared the 1110 level we discussed as a start to a reversal or upside move. Friday closed above the 200 DMA and moved in position to clear the downtrend line off the February high. The sector was still not taking on any leadership, but Monday showed a bullish move to start the reversal and lead teh broad market indexes higher. The index fell to support, but has held. As we stated in our post last week the goal was to add a position on the move through 1110 and then add to the position on a break above the 200 DMA and then the 50 DMA. Thus, two parts of the trade are complete with the move today to the 50 DMA. We still need to manage our downside risk in the event of a reversal from the bounce in progress. Stops would be a move back below 1110. 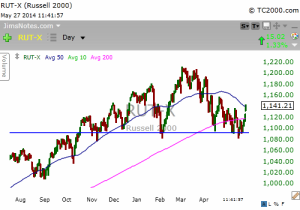 The home builders chart we posted last week has been attempting to hold support and reverse the short term downtrend in play off the February high. As you can see below it failed to clear the resistance point on the close today after a good start to the day. Still watching to see how this plays out. The implications in the housing sector are important for the economic outlook going forward. 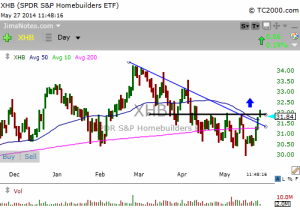 Each day we post new charts and update previous post in an effort to keep you informed on sectors and indexes that could and do have an impact on the overall direction and trend of the broad markets. The bottom reversal in play currently was started by the NASDAQ 100 index, but the Russell 2000 index above is started to exert influence on the broad market direction.