Market finds a way to rally and close higher. While I am not negative on the market, I am getting extremely cautious about this run. The S&P 500 index closed at 1556, and heading towards 1576, the 2007 high. The index has appreciated 4.6% since the February 25th close with only one negative day (Feb. 28th down 1.5 points) in the eleven trading days following. I have seen bigger runs, but this is worth our attention short term. If your outlook is longer term buckle up for some volatility as we proceed down the course. Scanning for rotation we continue to see developments on the upside along with some warnings.

Interesting start to the week as the major indexes find a way to attract more buyers and push stock prices higher. We have updated the research to reflect today’s activity.

No economic data of note today, but the upcoming calendar of events is at the link below.

The February 25th low pivot point remains in play this week. The chart below shows the leadership from XLY & XLF accelerating to lead the move. XLB playing catch-up after some selling has rebounded nicely on the upside. This position was added to the S&P 500 Rotation Model and the Variable Annuity Model. , XLU has returned to the positive trend after some selling last week. XLK played into the leadership move overall last week and we continue to look for some leadership to arise from the sector. 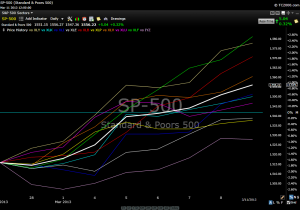 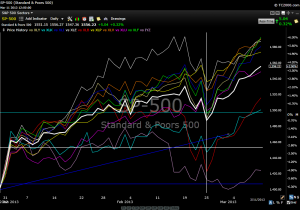 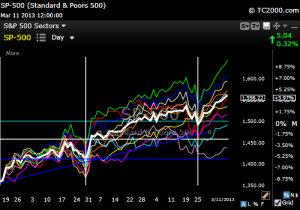 Telecom – The sector has finally made a bounce off the low and is attempting to head back towards the February highs. Added to the S&P 500 Watch List for entry. No move higher on Monday, but we remain patient.

Financials – Banks pass the stress test on Thursday and give the sector a needed boost on the upside. They continue to follow through on the move higher. Banks, regionals and insurance are all heading higher.

Consumer Discretionary – Broke above the $51 resistance on XLY hitting the entry point. The consumers are leading the broader market indexes on the race to the top. Extended the upside on Monday.

Treasury Bonds – The downside pressure on bond prices remains a concern for the Treasury market. Watch and protect on the downside. Estimates are for 2.75% on the 10 year bond by year end? That is something to watch and play PST on the short side.

Corporate Bonds – LQD = 3.8% yield. The price has found short term support ($118.90)… again. If we break lower being short is the opportunity. Patience as this plays out.

Municipal Bonds – MUB = 2.8% tax-free yield. The price of the bonds broke the support at $111.30 mark week and the selling continued today. This is a sector of the bond market to avoid for now. 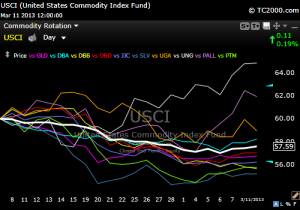 UGA – Gasoline has gained in volatility as traders look for catalyst on upside, but none being established on the current move. Testing the support levels again on Monday.

WATCH: Testing support at $60.50. Hit entry point and added to the model portfolio.

EFA – Watch $56.90 support to hold on the recent test. The long term uptrend remains in play and support has held and the fund has moved back to resistance at the $59.30 level. Watch and trade accordingly if it breaks to new high short term.