What if anything did we learn today from the bounce back from the modest test on Wednesday? It was a question I failed to see in the headlines today… go figure. First, the blame of the selling on the events in Canada was brilliant work by the analyst. Not sure that it was completely true as the market had a chance to respond prior to the close, but chose to sell to the low of the day on Wednesday. Regardless of the facts, the test of the bounce passed today with a gap higher that proceeded to move higher intraday, but failed to hold and closed at the Wednesday intraday high. Why does any of that matter? It gives clues to what is taking place as the market works higher, and it also gives clues to the sustainability of the current move off the October 15th low. Despite the selling, as you can see on the intraday five minute chart below, the last two days the index still worked its way higher. The goal of the bounce is make progressive moves to the upside and that is exactly what is taking place. 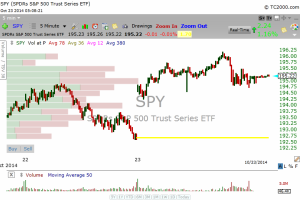 The gap open today was credited to earning from the old industrial stocks such as Caterpillar beating expectations and gaining 5% on the day. XLI was one of the leaders for the S&P 500 index as well and added 2.2% on the day. The move puts the sector ETF at the next resistance point as well and with a follow through on Friday could break higher to aid the index in doing the same.

The important aspect of the gap higher was it held from the open and then proceeded to move towards the next level of resistance at the 1970 mark., but as the clock struck three 0’clock the sellers took their best shot on the day and pushed the index back to the 1950 mark to close. This is all positive from the aspect that the sellers are still engaged, but the buyers have been embolden by the bounce off the lows from last week.

After-hours we again have earnings and the tale of two cities. Amazon missed and is trading lower by 12%. Many have been expecting investors to throw in the towel eventually on the aspect of continuing to promise better margins but failing to produce. The spending continue to rise and the profits suffer. The guidance was likely the biggest issue and thus tomorrow the NASDAQ 100 will struggle to make up the difference on this move in the stock. Watching to see how that unfolds. The other side of the story is Microsoft which reported better than expected results and is trading higher by 4% after hours. There cloud business is growing and adding to the bottom line as they continue to make shift from selling software to renting it. We will look to see how the two balance out relative to the index.

The shift in sentiment to the positive has brought in more buyers than we expected when this party started. The earnings have not been good overall, but they have been strategically good enough to bring the buyers back to the table along with the Fed engaging in propaganda concerning quantitative easing and delaying interest rate hikes. Plenty to watch and digest as the news continues to swirl about what is driving the markets. Take it one day at a time and one trade at a time.