The week was mixed on one hand and positive on the other. The big story for the week has to go to Apple dropping nearly 12% in value as investor appear to throw in the towel. The support at $520 is key and a break below that mark could accelerate some selling. It has kept the NASDAQ in check as the index failed to clear the 3000 level on the week

The fiscal budget issues remain in the headlines with no real changes overall. The markets at some point will start to price in the cliff as we creep closer to the edge. I am was convinced they would settle this issue, but the saber rattling is getting louder. In the end only time will tell the outcome, but it has an impact on sentiment and it will grow with each passing day.

Next week we look for the move to the upside to continue as we pushed through some short term resistance levels, but plenty remain. The seasonal period is helping stocks on the upside and you don’t want to fight the trend. Take what the market gives one day at a time. Remain disciplined.

The index moved the 1415 level to close at 1418.. the significance of that will be determined next week. However, the 1415 mark has been a challenge for the index. The 50 day SMA is at the same level currently and could provide some resistance.  The Scatter Graph below has a starting point of 11/15 which was the pivot point for the recent uptrend. As you can see at the end of the chart the sideways movement depicts the confusion from investors as well as some rotation in leadership. Materials bounced back from the selling but remains lower. Technology has struggled with the Apple saga. Still struggling overall to define direction and leadership.

The chart is showing rotation to financials, industrials and utilities as the leaders. Energy has made a turn off the low despite oil dropping back to $86. We continue to watching the jockeying for position short term, but we are still in need of a catalyst to the upside to break through resistance on the index. The market wants to move higher, but it can’t get all the parts going in the same direction.

VIX index has been rising and worth watching as the sideways movement looks for direction up or down? 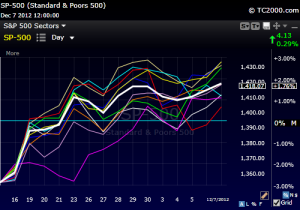 NASDAQ Index – Apple remains a drag on the index which closed lower on Friday, back below the 200 day moving average and the 3000 mark. As goes Apple, so goes the index for now. Not willing to buy into the index until the Apple flu is cured.

S&P 400 Midcap Index – The bounce off the low has now returned to the top end of the previous trading range. A break above the 1000 mark on the index would a positive and a opportunity to trade the sector. Be patient with the entry as this unfolds. failed to make the move on Friday, but the set up is still in play. Watch and manage the risk.

Dollar – The dollar sold lower and broke support at the $21.95 level on UUP earlier in the week. Now it is back at $21.99 and resistance? The greenback has been up and down of late and for now I am more interested in watch than owning the dollar. The dollar index (DXY) pulled back to support at 79.6 and bounced on Friday as well. Not enough room for any trading for now.

Euro – The euro dropped back to the 200 day moving average and looks like the inverse of the dollar for now.

Treasury Bonds – The yield on the 10 year rose to 1.62% and the 30 year to 2.81% on Friday. For TLT that pushed it lower from the consolidation wedge and sets up a trade opportunity on the short side. Watch for the outcome on Monday to give some clarity to the trade.
High Yield Bonds – Big bounce on stocks moving higher with stocks. Interesting bounce. Hitting resistance at the 93.50 level. Watch for a follow through move higher?

Base Metals – DBB are testing resistance at $19.40 on the upside and if we find the catalyst to move through that level would be short term trade opportunity.

The NASDAQ Global Market Index (NQGM) broke above the 200 day moving average. However, the last three days the index has tested lower. The reversal isn’t reflective of the move in the EAFE which closed near the top end of the current trading range.

WATCH: FXI – China gapped higher on Wednesday (passed on our trade) and held the move today. Clearing the $38.10 resistance on FXI is testing the gap higher and watch for the $36.65 level to hold as possible entry play short term. The economic challenges facing China moving forward are many, but investor are willing to look past that and believe in the trend. Gap higher on Wednesday as money rotates into the ETF.