Netflix got the credit for positive earnings sparking a rally on Wall Street. The 1% gains pushed the S&P 500 index back into the previous uptrend and everything is good. There remains a hint of skepticism relative to the move or at least that is what the volume data shows. Today’s volume was skewed by the false tweet about the White House where there was a spike in selling and buying on the news or should we say false news. The NASDAQ helped lead the broad markets to the upside with a 1.1% gain and a move back to the 3270 resistance point.

Earnings remain the challenge and none bigger than tonight with Apple. They reported a drop in earnings of 18% from the year ago quarter, but revenue beat estimates and earnings were in line. The lower revenue forecast and margins on products was my concern, but evidently I am alone on that one. The use of capital is where the meat was for the report, at least for after hours traders. They are going to use $100 billion of the cash on hand to buy back shares and increased dividend payments. When it was all said and done… smoke and mirrors. They still need to innovate and create new products or the picture gets worse going forward.

The big global companies maintained their guidance today as part of their earnings report. This is putting some wind in the sail of XLI or the industrial machinery sector, look for a move above $40.85. There was weakness in China’s PMI data today, but based on the reports it was ignored everywhere but China. FXI was lower on the day. Global markets were looking better overall on the day, but still plenty of worries hanging over the street.

Earnings mixed… AGAIN! But, all eyes are on Apple in after-hours trading. The real proof will come in trading tomorrow. The buyers stepped into the technology large cap stocks with Microsoft and Intel leading the NASDAQ 100 higher. Netflix and other are adding to the euphoria short term. Take what the market offers, but remember the music will stop and everyone will scramble for a chair eventually. Protect against the downside risk.

EACH MORNING I WILL POST AN UPDATE TO THE RESEARCH PAGE TITLED TRADING NOTES FOR TODAY! This is will take the evening notes and post what I am looking for in the trading day. They will be posted by 7 am to give you time to establish what you would like to do with the notes. .

The new home sales were positive and that helped push the homebuilders higher on the move. XHB was up 2.5% on the news.

The fundamentals are not supporting the charts plain and simple. That said, the deflationary activity of the data is impacting the markets on the upside. At some point this will all come together and the direction will be better defined than the last six weeks. We have maintained our three pivot points on the charts below until the uptrend off the November low is broken.

The February 25th low pivot point remains in play. However, the volatility of the sideways trading is making crazy. The index was at 1563 on August 14th and it closed at 1578 today. All of the previous leaders are reestablishing their positions again on the chart. Watch XLV, XLP, XLY, IYZ, and XLU as the leaders. Watch XLF as financials attempt to move higher again. 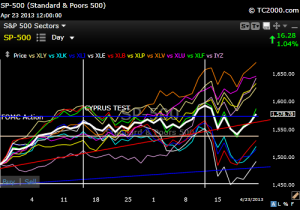 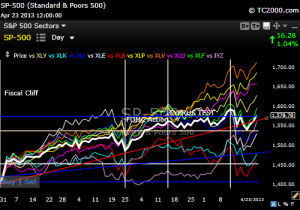 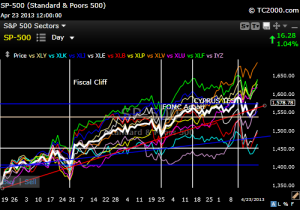 Semiconductors – held support and we are watching for a boost from the sector on the upside to continue to push technology stocks higher. Some rotation towards the growth sectors is needed if the index is are going to make another run higher. SMH is moving back to key resistance at $35.60. Watch to see if their is any gas left in the tank to run higher. Nice move higher on Tuesday as SMH tests the previous high at $36. Watch for a break higher now.

Consumer Staples continues to defy gravity and moves higher. The 10 day moving average is the trailing the uptrend for the sector and we hold and watch for now.

Utilities are in the same mode. Remember the current theme is deflation and that favors the defensive sectors. They continue in an uptrend and we maintain our positions with the trend.

Telecom is building a flag pattern off the vertical move higher. Hold and add to positions if we can clear the $26.10 level on IYZ. Tuesday broke higher and the positive continues. Watch tomorrow as AT&T is trading lower after-hours on earnings.

TAN – The Solar ETF jumped 5% today. SOL, WFR, CSUN and FSLR were the leaders within the ETF. This puts the fund back at resistance at the $18.12 mark and it cleared it on Tuesday. Upside remained in play.

Treasury Bonds – Yields on the 30 year Treasury is finally flattening out. The economic data, flight to safety, or many other reasons have pushed money back into the bond short term. If the volatility in stocks returns look for more rotation into bonds short term. For now be patient and let this play out.

Convertible Bonds – CWB = 3.6% yield. Price had been moving higher on the rally in stocks. Tested the highs last week and this week we are testing support? Trading range and dividend collection. 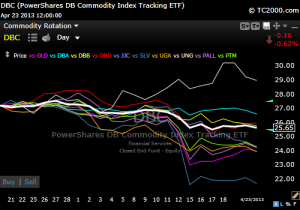 Global markets drop on slower economic data in China, Europe and the US. They tested lower on the news in Europe and China keep the markets in check. Scanning our watch list of Country ETFs there are some interesting moves to watch. 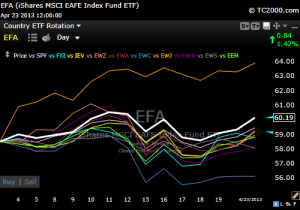