We follow up Monday’s positive move with more selling and a break of the next level of support on the S&P 500 index. As we discussed in our weekend update, the sellers have control, it is just a matter of how far they are willing to take it. The buyers have stepped aside for now and buying on the dip may be 1897 mark on the index. The VIX index spiked back near the 17 level.

Russia didn’t help today as the report came that 20,000 Russian troops were position just 50 km off the boarder of Ukraine. The change is in response to the Ukraine troops making advances against the Separatist. RBL fell 3.1% on the news, but more importantly the US equity markets fell below support and accelerated the downside on the news. RUSS gained 9.7% today. The geopolitical pressure is officially back on for the markets.

Economic data was the first on tap today with the market trading in negative territory it provided some hope on the day with a modest bounce. Markit Services PMI was off slightly at 60.8, ISM Services better than expected at 58.7% up from 56% in June, and Factory orders rose 1.1% and well ahead of estimates. The economic data continues to show better than expected improvements, but the market has not responded with any upside. Worries about interest rates and the Fed remain the primary reason given for the response.

Social Media (SOCL) sector started off down 1.6% on the day and made an effort to bounce, but the selling took control closing down 2.4%. We were watching to see if the sector could break from the current consolidation and move back towards the March highs. The sector has printed better than expected earnings despite the shot taken by Fed Chair Yellen. Several analyst have taken their respective shots at these stocks as well stating the advertising models are not sustainable long term. Short term however, it could break higher and a make run well worth trading. First we will have to overcome the current negative sentiment. 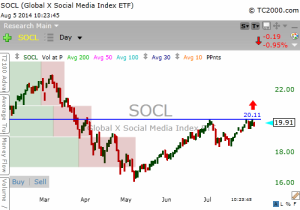 The S&P 500 index moved below the support at the 1925 ish level today. Despite what has been positive economic data and earnings, investors are still reluctant to put money to work and drive the broad indexes higher. If anything it has been more of a buy on the rumor and sell on the news type market the last three weeks. Energy was the leader on the upside on Monday returned the favor today on the downside. Technology with the assist from Social Media and Semiconductors were negative as well. Telecom was the only sector posting a green number on the day and it wasn’t that impressive. Watch the acceleration on the downside with the break of support today. 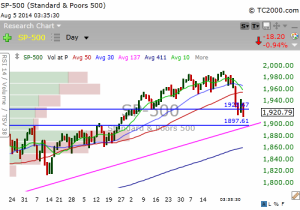 Emerging markets (EEM) were down more than 1% early as the sellers were back in play. The ETF fell 1.6% on the day and closed below the 50 DMA. The uptrend line off the February lows is being taken out on the move lower. $43.25 is the level of support to watch short term and an exit point for longer term positions.

Treasury bond yields rose early, but as fear mounted the yield declined to 3.28% on the thirty-year bond. If the issue is with the Fed hiking interest rates in early 2015 the yields on the bonds are going the wrong direction. The bonds are holding steady and remain a trade only position as the downside will eventually win out if rates do rise.

Where does this leave us relative to our outlook? Not much has changed in response to the action today. Sentiment is still negative. The fact that Russia was part of the selling pressure puts the news element in the move and something to watch in tomorrow’s trading. Interest rates are still falling not rising. Economic data is better, but not enough to give the sentiment it needs to overcome the interest rate hike obstacle. Thus we have to continue to take it one step at a time and give the news time to clear and the truth to rise to the top. Not easy to be patient when the media turns it all into a three-ring circus act. Stay focused and most importantly remain disciplined.