Another mixed reaction to a positive data point in the broad markets? The ISM Services number was much better than estimates and that reversed a negative open. The concerns were… Russia/Ukraine again. The worries remain as to how much and when this will impact further sanctions by the US and Europe. Nerves are still jittery relative to the future and investors lack a willingness to over commit at this point.

The market is still consolidating near the highs and looking for a catalyst for the upside. Today started with plenty of negative sentiment, but found buyers willing to step in on the lows and push the indexes back into positive territory. The key for is patience and until the direction is defined willing to let this unfold further before committing capital to the risk of stocks.

Banks continue to be a drag on the broad markets and now are in position to break support and move lower. SKF is starting to look like a better play than owning the sector. 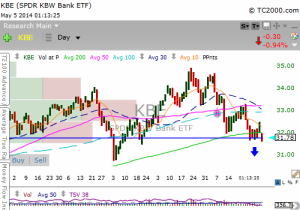 Final Note: The markets are still uncertain on direction. The overhang of Russia/Ukraine is a challenge for the global markets and oil delivery. Without further clarity near term it remains a negative catalyst potential for the markets. Economic data has been improving versus the winter reduced growth in February and March for the US economy. The challenge comes in the continuance of growth at a reasonable level. Until the picture clears it will remain a focus for investors.