Markets opened higher, but the news and issues pushed the sellers to take control again. The tale of conflicting data is the challenge for investors as they attempt to sort through the US Labor market. Jobless claims were down 30k on the week a number not matched since February 2008. But, wait that’s not all, one state accounted for the total drop in claims. The speculation is California and they are believed to have mixed up the seasonally adjusted claims. Wow, can the jobs reports get any crazier? This hurts any upside benefits from the improved numbers.

Should we be worried about the current reports on the economy? Global economy? Corporate earnings moving lower? Commodity inflation? Does any of this really matter? The simple answer is not until it does. The only challenge with that is determining when that will be? Thus, manage your risk, determine your exit points, set your stops and watch to see how it plays out short term.

Oil gained back the 1% lost on Wednesday to keep crude at $92 per barrel. The speculation game continues in the commodities and the risk of playing has risen equally. Chevron’s news on earnings slowing pushed the index lower on Wednesday, but it bounced back today. Support is $72.70 and worth watching to see how it plays out.

Treasury yields are on the decline again? The thirty-year bond fell to 2.85% as investors continue to rotate towards safety. The shift is due to the news concerning the economic picture looking bad both short and longer term, and it is gaining traction. Watching TLT and IEF here for the speed of the transition. TLT is still in a downtrend off the July high, but watch to see how this anxiety plays out.

Overall it was a challenging day for the markets, but it amounted to another test of near term support. There is still plenty of work to do and worries to conquer for investors and their confidence, not to mention earnings reports.

What am I watching for Friday?

Treasury Bonds – TLT bounced off support at the $120.75 mark. If the momentum builds bad news for stocks.

Natural Gas has jumped higher with a break above resistance on Thursday – Watch for follow through play.

China breaks out despite all the talk. Buyers are putting money to work. FXI cleared $35.70 look for entry on confirmation of the break higher. GXC is more diversified play, but the volume is much lower.

Bank earnings start next week and expectations are positive. KBE has been holding up with Citigroup and Bank of America leading the way higher.

Apple – (AAPL) Can the stock hold support at the $623 level? If so, a bounce play may develop short term.

S&P 500 Sectors-to-Watch – The index has picked up selling momentum to test the 1430 support. The attempted move higher has reversed course and is now at the critical support level of 1430. We have held thus far, but the bounce on Thursday failed to hold and we take that as a negative sign short term.

The Scatter Graph below is run from a starting point of the high on 9/13 following the FOMC meeting to provide stimulus and the markets rallied. As you can see we drifted lower from the high tested. Now it is testing lower again. The leaders have turned lower with healthcare, consumer staples and telecom shifting lower. Utilities, telecom and financials are holding up, but the materials, industrial, energy and consumer services have sold lower as well. The new pivot point is the high on October 4th and we will look to see how that unfolds. So far utilities and financials are leading off this point and the downside leaders are technology and consumer services. Watch the current selling for clarity as we go forward. 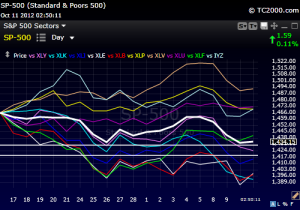 Financials – Bounced off support at $15.45 and moved higher. We held support and took the entry on the upside to lead the broad markets. Monitoring our stops we held support at $15.95 and we will watch how this holds up short term. Big bounce early on Thursday, but it evaporated as the day went on.

Energy –  The sector has been churning on the up and down movement in crude. Throw in Chevron’s wreck on earnings and the sector is on the watch list for direction needed.

Telecom – Added the play with the sector remained in a positive uptrend. It has picked up volatility as the merger news and outlook have clouded. Sprint in the news with possible merger with Japanese company today. Watch, manage the downside and keep moving forward.

Healthcare – The sector has pushed gradually higheir, but there is some more testing the move higher. Two days of back to back selling puts the index is a tough spot relative to support. Watching for $40.20 to hold short term. A look at IHI puts the downside risk into perspective. Manage your stops.

NASDAQ Index – The index has been under pressure from the large cap technology stocks selling. Apple is putting downside pressure on the index short term. Raise stop to break-even and watch for move through resistance near the $29 mark.

Transportation Index – The transports bounced off support last week at the $86.75 mark on IYT. They were chugging along nicely, but hit some resistance as the broad indexes have been selling. Still looking for this to be an indicator on the upside or downside for the economic picture short term.

Dollar – The dollar, like stocks, is being pushed up and down based on the daily sentiment towards Europe and the global economic picture. The downside pressure on the dollar has met support currently and bounced. Looking for a clear direction on the buck.

Treasury Bonds – The upside for the bonds are in focus as the markets reach a point of uncertainty. Looking for money to rotate back into bonds if the risk is rising.

WATCH: TLT – Watch for a break of the downtrend line off the July high.

4)  Commodities: Tough sector to own currently with the rise in volatility across the sub-sectors. Watch for shift in direction short term.

WATCH: OIL – up/down??? Watch to see if we gain any short term clarity.

5)  Global Markets: The global markets bounced last week off the low at $53 on EFA. It has been testing the support level again along with the 50 day moving average. Break of support brings the short trades into play. Small bounce of support on Thursday, still watching the downside.

WATHC: REM – Shift in sentiment and broke support at $15 as the downside is gaining momentum. NLY is acting the same short term as money rotates from the sector.