Mixed reports on the ISM manufacturing numbers had investors guessing which report was right. In the end the number we near expectations, but the guessing game kept investors in check relative to an impact from any positive news. The data was close to expectations, but we are still not getting the growth expected for the second quarter and raise enough questions for the market to close flat on the day. This is a week full of data and the challenge will be how investors interpret it all the way through the jobs report on Friday. We have to be cautious and take what the market gives looking forward.

Transports, semiconductors, industrials, materials and consumer discretionary were the upside leaders on a slow day for stocks. Still a mix of defensive versus growth in the move and the volume remains on the low side. One day at a time as we make progress towards the answer on near term direction.

I am traveling the next couple of days and will not post a recording per usual. The text and trading reports will be posted as usual. Thank you for your understanding.

The banks made solid move early, but following the ISM manufacturing data the advance slowed, but still made a solid move higher. The chart below of KBE shows the need to get through the next level of resistance at $32.25. If the moves can get a push higher we would be interested adding to our positions moving forward. 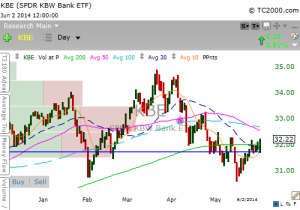 In the scans run for the ONE EGG model last week we stated that semiconductors remained one of the key leaders to track with SOXX or SMH. We followed up the discussion with BRCM as one of the best options on the upside with potential. That showed today with the stock jumping more than 12% on the news the company may be willing to sell off part of their business and was in talks with JP Morgan. As you can see on the chart below this trade has played out better than originally expected short term. 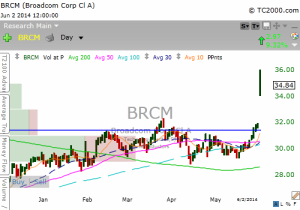 Breakouts are slowing some consolidation is building. Watch you downside risk and stick to your discipline.