Today was about improving numbers relative to the economy. The ISM Services data was better than expected and actually positive all the way through the data. The index rose to 55.1% versus the 53.7% expected. New orders were up 4% and inventories fell 4%, both numbers were positive. The services sector accounts for approximately 80% of the economy, thus step one taken in the overall data improving.

ADP Jobs report was better than expected as well with 162,000 jobs added in the private sector. This is good news, but many investors are still looking towards the government data to confirm more hiring in September. The jobs report is out Friday morning at 8:30 am. We will se how that works out.

And lest I forget the infamous debate starts tonight. While I am not a big fan of these events, it will set the tone on Wall Street for the outcome.

Markets were in favor of the economic data improving as the major indexes moved higher on the day.

S&P 500 Sectors-to-Watch – The index has picked up directional volatility. The last week of trading has lacked direction. We remain above the 1430 support level, but nothing is safe at this point. The tug-o-war remains in play and the intraday charts show it in full color. What is going to be the catalyst and which direction will the market take going forward. That is the primary question and we will have to be patient and let it unfold.

The Scatter Graph below is run from a different starting point tonight. I am using the high on 9/13 as the start point following the FOMC meeting to provide stimulus and the markets rallied. As you can see we have drifted lower from the highs, but the ten sectors of the index have scattered. The leaders are the defensive sectors with Healthcare, Telecom, Consumer Staples and Utilities outperforming the index and the growth sectors lagging.

I moved the same chart forward with a start date of September 26th which is the recent low and we have Financials, Healthcare and Consumer Staple leading the index. Energy was leading until today’s tumble in oil prices below $90. The only common ground in the two charts is the Healthcare and Consumer Staples. Those are worthy of watching and adding to positions moving forward. 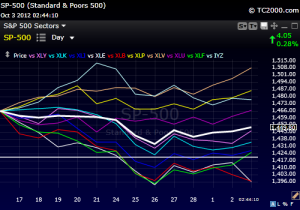 Financials – Bounced off support at $15.45 and holding. Watch to see how this plays out near term. We held support and took the entry on the upside for on a bounce effect in the broad markets. Monitor your stops closely. Nice move higher today as the banks move. KBE held support with a solid move to the upside.

Energy –  Broke below $73 support with crude moving below the $90 support on supply data. This is a negative for teh sector as we test the previous low of $72.79. Watch and manage your stops on the play.

Telecom – The leadership of the market tested lower again, but the uptrend is still in effect. Watch for the opportunity to put the play back on with a reversal back to the upside. Watch the 25.22 level of support to hold near term. The parts are moving and they are a equal opportunity. Still not enough to push through the entry point.

Healthcare – The sector continues to push gradually higher, but is testing the move higher. IHF hit at new high on Wednesday and is providing some leadership for the sector. Pharma is still struggling and XPH is at key support near $59. Hold positions and manage the stops.

NASDAQ Index – The index has been under pressure from the large cap technology stocks selling. the bounce was enough to off set any short opportunities for now, but watch the support at 2782 to hold. Added the short trade if the downside develops.

Transportation Index – The transports are key indicator for the health of the economy. We are tracking this to see how it compares first, with how the market is doing relative to the sector. Second, to see if the sector is reflecting the economic data. IYT, iShares Transportation ETF is testing the key support level at $86.75 and this is the number to watch short term to confirm a move below support. Thus currently we see the index reflecting the economic data more than the market overall. Negative sign for stocks. Bounced on Wednesday with the improved economic reports.

Dollar – The dollar, like stocks, is being pushed up and down based on the daily sentiment towards Europe. The downside pressure on the dollar has met support currently and any hope of the dollar rising is tied to Europe continue to provide a fear factor. We got the bounce off support and UUP is hitting against resistance eat the $21.92 mark. Be patient and see how this plays out.

Treasury Bonds – TLT sold to $118.25 on the Feds stimulus announcement. That support level held and the bounce off the low is gaining momentum relative to the uncertainty in Europe. Our trade on the move off support is working short term and our stop have been raised to reflect the move higher in bonds. We took a small position in TLT on the move above $122.45. The downside may accelerate based on the data going forward. Adding the short play if we break lower on the bond.

Question: Is there are bubble in the High Yield Bond Sector? HYG recently tumbled from $94 to support at $91.60. While the decline was only 2.5%, the show of volatility and risk relative to the price of these bonds was made abundantly clear. Is the party over in the sector or is this a buying opportunity? A break of the near term support would be a exit now and ask questions later event.

4)  Commodities: Gold snapped back and held. The break lower was temporary, and we have to watch and see how it play out at resistance. Gold miners bounced back from the selling as well. Silver held support on the bounce back also.

DBA – Broke below the $29.50 support level as agriculture sells overall. Small bounce on Friday, held today and showes there are some buyers still in the sector. Watch the downside risk short term. If the bounce develops it may be added to our watch list.

OIL – The support gave way at the $90 level on Wednesday as the inventory data was disappointing. Short trades were jumping in DTO.

5)  Global Markets: The global markets resumed selling on the worries in Spain and Greece. They bounce on Thursday relative to assumptions about Spain. Those assumptions reversed again on Friday pushing the EAFE lower along with support near the $52.80 level. Trouble brewing!

6)  Real Estate (REITS) – The sector tested the recent high and support is holding at $64.20 (IYR). Watch your downside risk if you still own this sector. We are looking for upside play if support holds. The downside move today was a negative for the sector.

Spain as we have discussed was a potential issue for the broad markets. The uncertainty is starting to play out currently and we have to be aware of the downside risk it poses. Nothing has been officially done and all the talk is nothing more than rumors. The real answer will depend on the deal with the IMF and the ECB. EWP tested support at $27.60 and holding. If you like short plays this is setting up based on the direction. Thus, we are getting some answers on how this issue will impact the market globally and domestically in the US. Still all rumor driven, and we will continue to monitor the situation.

China was moving on infrastructure stimulus, but the spat with Japan derailed the progress along with economic worries. Watch FXI as the up and down impact of news creates some short term volatility. This story will unfold into a upside play if the stimulus works or a downside play if the sentiment shifts. The current volatility is tied into the issues above with Spain as well as the uncertainty for the economic picture in China. Still looking for the directional trade as this all unfolds.

The economic picture remains a mess plain and simple. The stimulus in play has masked what the true impact should be to the equities market. This is a big concern going forward and one that will eventually get priced into the markets. The data continues to decline as seen in the reports. As the quarter ends we face a new round of data and earnings. If the preliminary analysis is correct, earnings for third quarter may be another negative for investors. We have to prepare for the worst and hope for the best. Either way keep your focus and monitor the data relative to the overall goal and objective.

What am I watching now:   Leadership following the FOMC stimulus on Thursday (9/13) is what I am tracking currently to get pulse on the impact and opportunities from the stimulus. Scanning this at the end of this week resulted in the following:

Digging further the following are some opportunities we are adding to the watch list for next weeks trading:

1)  SLV – tested support last week and is now in position to move higher watch for the break above the previous high.  2) Oil bounced off support at $90 and closed the week near $92. USO is play on move above resistance and XLE above $73.80. 3) Bank of America entry on test of support and move back through resistance to continue the uptrend. 4) YHOO on move through the top of the channel. This is a opportunity on the new CEO leading the company back to life.  5) MSPD gapped higher and is consolidating. Looking for a break above the $3.55 level for entry and trade.

Watch and play according to your risk tolerance. Everyone has different trading styles and you have to find what works for you and your personality. Don’t put yourself in positions you don’t understand or take risk you can’t tolerate. Not every trade results in a profit, but controlling your downside risk determines your long term results. Trade smart!